Dr Katherine (Katie) Mack is a theoretical astrophysicist and assistant professor of physics at North Carolina State University. Her research has focused on dark matter, the early universe, galaxy formation,[…]
Go to Profile 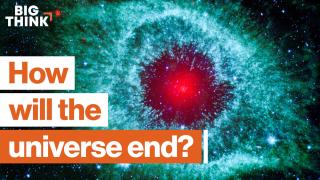 How ‘heat death’ will destroy the universe

The expansion of the universe is speeding up—contrary to what many physicists expected. A "heat death" is coming, but it's not what you think.
▸
7 min
—
with
Katie Mack

KATIE MACK: When we look out into the night sky, we see distant galaxies are moving away from us. They're also moving away from each other and that's just what happens when all of space is getting bigger.

Everything is moving away from everything else. We can see the expansion carried out in the past—you know, it's carrying it out now—and we can extrapolate to the future and say it really looks like that expansion is going to continue forever.

As that process continues, everything is decaying so much that all that's left is the waste heat of everything that ever existed in the universe. So, you end up with a universe that's just very cold, and dark, and empty, and expanding all the time. That's the most accepted theory for the end of the universe.

My name is Katie Mack. I'm an assistant professor of physics at North Carolina State University and my book is called "The End of Everything (Astrophysically Speaking)." I thought it would be fun to talk about the far future of the universe. I find the fact that you can write down an equation and tweak a term and then the universe is destroyed... I find that delightful.

I study cosmology, which is the study of the universe from beginning to end, from the largest to the smallest scales. Most of the time in cosmology and physics, everything changes on very short timescales; everything's very orderly. And there's something kind of amazing about the idea of just big, destructive forces. The main observation that we have that tells us about the future evolution of the universe is the expansion of the universe.

It should be slowing down because there's that immediate kick of the Big Bang. And then all of the stuff in the universe has gravity; all that gravity's going to be pulling back. It should be putting the brakes on that cosmic expansion.

In the late 1990s, astronomers measured the expansion of the universe and found, actually, it's not slowing down at all, it's speeding up. When that was discovered, we gave it a name. Something is making the universe expand faster. Whatever that something is, we're calling it dark energy. And one of the leading ideas for what dark energy is is actually an old idea from Albert Einstein which is called the cosmological constant.

His idea was that there's just some inherent stretchiness in space, that space has this tendency to expand just built into it. The reason that would cause the expansion to accelerate is that, in the past, there was a lot of dense matter and not that much space because the universe was smaller in the past, but now there's so much empty space that this little bit of expansiveness in every piece of empty space is starting to win out over the pull of the gravity of everything.

And so, the expansion is speeding up because now there's so much empty space that the cosmological constant is kind of taking over. If all we have in the universe is matter with gravity and dark energy, this cosmological constant, then we know how that acts. We have a pretty good idea of what's going to happen in the future and we reach heat death based on that idea.

In physics, when we use the term heat we mean something very specific there. We mean disordered energy. If you have a machine that's doing something, as that machine runs it's not going to be 100% efficient; it's going to lose some energy all the time. And there's going to be some waste heat in the running of that machine. That's actually a law of nature, that every process is at least a little bit inefficient.

And what that means is that, over time, the disorder in the universe increases. That's something called the second law of thermodynamics. This second law of thermodynamics says that any time a process happens, it's going to create a little bit of disorder in its wake. We think that really holds for the entire cosmos as well. As time goes on, there's going to be more and more disordered energy in the universe, more and more entropy.

At some point—if that continues forever—then, at some point, all that's left in the universe is disordered energies. Entropy is heat, and so the heat death is a term we use to talk about when you reach that maximum entropy state.

So, what happens in the heat death is that, 100 billion years from now, the universe will have expanded so much so quickly that we will not be able to see distant galaxies anymore. Our most powerful telescopes, when they look out into a dark part of the sky, will see nothing but darkness. Those amazing pictures from the Hubble Space Telescope of beautiful spiral arms—nothing. You won't see anything like that.

And then, maybe in a trillion years, we'll start to not have stars. The last of the stars that currently exist in our galaxy will be dying. Galaxies stop interacting with each other because they get so far apart from each other, which means that you don't get new stars being formed, you don't get collisions of gas that create new stars.

If you want to talk about when the black holes are evaporating, for the smallest black holes that we know exist in the universe, then you're getting up to 10 to the power of maybe 65 years or 70 years.

Somewhere in that timeframe, those black holes will disappear. It's a long time after that that you get things like all of the supermassive black holes in the centers of galaxies—those take much, much longer to evaporate. Somewhere in there, particles decay. You know, nothing can happen anymore. No information can be organized anymore. Everything is basically over at that point. But this is so far in the future. It seems very unlikely that any actual humans could be affected by any of this.

Finding aliens: Is there a ‘theory of everything’ for life?