While black holes may well be points in space into which everything falls and from which even light can’t escape, the image many of us have of an ever-growing nonstop universe-eater may not be so. Stephen Hawking didn’t think it was. He theorized that black holes eventually evaporate as a byproduct of the gradual release of tiny bits of radiation now known as “Hawking radiation”. Such emissions are too faint for us to observe from so far away, but now the behavior of an artificial, lab-created black hole of sorts has lent support to Hawking’s theory. There’s nothing about this story that isn’t interesting. For one thing, this man-made “black hole” is made of sound. It’s also formed inside some always-bizarre Bose-Einstein condensate. 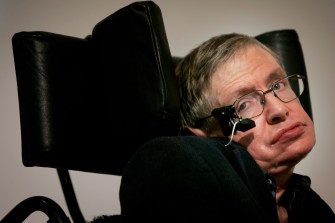 While it’s known that photons can’t escape the pull of a black hole, Hawking’s equations, intolerant of absolute nothingness, suggested “empty” space is actually full of virtual quantum matter/antimatter pairs that blink into existence, and immediately annihilate each other thanks to their opposite electrical charges, quickly blinking out again.

Hawking proposed that when virtual pairs pop into existence near a black hole, though, they’re torn apart by the pull of the black hole, with the antimatter being sucked in while the matter shoots off into space — at this point, they’re no longer virtual, but real, particles. The negative charge belonging to the antimatter particles reduces the energy and mass of the black hole that’s absorbed it by a tiny amount — however, when a black hole ingests enough of these, it evaporates. The positively charged particles fly away as what’s now called “Hawking radiation.” It would be very weak, but nonetheless there.

Hawking also predicted that the radiation emitted would exhibit a continuous thermal spectrum rather than discreet light wavelengths preferred by individual escaping photons. The temperature of the spectrum would be determined instead by the black hole’s mass.

Part of the problem in testing Hawking’s theories was summarized by physicist Silke Weinfurtner, who has written:

“The temperature that is associated with Hawking radiation, known as the Hawking temperature, is inversely proportional to the mass of the black hole. And for the smallest observed black holes, which have a mass similar to that of the Sun, this temperature is about 60 nanokelvin. Hawking radiation therefore produces a tiny signal, and it would seem that the phenomenon cannot be verified through observation.” 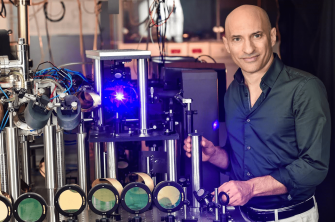 The analogue black hole in Haifa

Experimental physicist Jeff Steinhauer of Technion–Israel Institute of Technology in Haifa, Israel, has been working alone in his lab for years creating sonic “black holes” that suck in and trap sound waves. (He’s a drummer, too.) Physicist William Unruh of the University of British Columbia in Vancouver, Canada, first proposed the creation of a sound-wave black-hole replica in 1981 as a safe way of observing the behavior of the stellar version. (After all, creating a real black hole in a lab or anywhere nearby could lead to The End of Life as We Know It.)

Steinhauer’s black-hole replica was “constructed” within a Bose-Einstein condensate (BEC), an extremely strange form of matter in which atoms are cooled to a temperature vanishingly close to absolute zero. At this temperature, there’s so little energy available that atoms barely move at all in relation to each other, and thus the entire superfluid begins to behave as one big, unified atom. Within such a frigid condensate, weak quantum fluctuations occur, and these produce pairs of entangled phonons, compressional waves that can create the air-pressure changes we perceive as sound.

Working with a cigar-shaped trap just a few millimeters long, Steinhauer cooled some 8,000 iridium atoms into a BEC. Inside it, the speed of sound, the rate at which the condensate flowed, dropped from 343 meters per second to an almost stationary half a millimeter per second. Reducing the density of one area of the BEC to allow atoms to travel at 1 millimeter per second, though he created a supersonic region — at least compared to the lower speed in the rest of the condensate, that is. Its comparatively rapid current overwhelmed and pulled in any high-energy phonons that came near its event horizon, thus trapping them.

In August, Steinhauer published a paper in Nature that documented his observation of phonons emerging from his artificial black hole in line with Hawking’s predictions. Steinhauer reports entangled phonon pairs popping into existence together equidistant across the condensate’s event horizon and behaving much as Hawking predicted: One pulled over the supersonic waterfall and trapped in the supersonic region, and the other escaping outward, away from it, just as Hawking radiation would do. The symmetry in the number of phonons inside and outside the event horizon further supported their entangled beginnings and eventual separation, as in Hawking’s prediction.

On top of that, the aggregate radiated phonons did indeed produce a thermal spectrum determined by the system’s analogue to gravity/mass, which in this model’s case was the relationship between the speed of sound and the flow of the BEC, and not individual phonons’ sonic wavelengths. 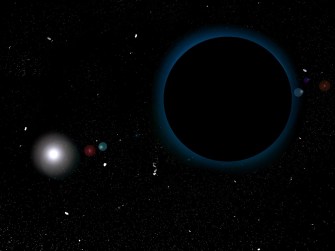 While the behavior of Steinhauer’s phonons in his black hole analogue certainly supports the plausibility of Hawking’s hypothesis, it doesn’t constitute proof. His experiment deals with sound and phonons instead of light and photons, and obviously operates on an entirely different scale than a real black hole — and scale does matter in quantum physics. Still, it’s fascinating.

Theoretical physicist Renaud Parentani enthuses to Live Science, “These experiments are a tour de force. It’s a very precise experiment. From the experimental side, Jeff Steinhauer is really, at the moment, the world-leading expert of using cold atoms to probe black hole physics.” Other aren’t as impressed. Speaking with Nature, physicist Ulf Leonhardt says that while, “For sure, this is a pioneering paper,” he considers it incomplete, however, in part because Steinhauer was only able to correlate phonons of high energy across the event horizon, and didn’t find that low-energy phonons also behaved as Hawking predicted. In addition, Leonhardt is concerned that what was inside the trap wasn’t a true BEC, and that it could be producing other forms of quantum fluctuation that just look like Hawking radiation.

Water is vital for life. Luckily for spacefaring humans, the solar system is full of it.
Up Next
Strange Maps

A map of America’s most famous – and infamous – people