Four trillion pounds of ice melted in Greenland on June 13 due to unusually warm and sunny weather, scientists report. Although it’s normal for ice to melt during Greenland’s “melt season,” the ice this year is melting earlier than expected and at an alarmingly fast rate.

“It’s very unusual to have this much melt so early in the season,” William Colgan, senior researcher at the Geological Survey of Denmark and Greenland, told the BBC. “It takes very rare conditions but they’re becoming increasingly common.”

Greenland’s current ice loss is on track to break records. In 2012, the island nation saw similarly severe losses, which, like current melting, was fueled by two main weather factors: a high-pressure system that carried warm air from the Central Atlantic to the skies over Greenland, causing warmer temperatures, and the resulting low cloud cover and snowfall, which allowed sunlight to hit the vast ice sheets.

Frozen white ice reflects most sunlight back into the sky. But melting ice turns into darker colors, which absorb more light and heat. This creates a positive feedback loop that speeds up melting.

“You’ve experienced this if you’ve walked down the road barefoot on a hot summer day,” geologist Trevor Nace wrote for Forbes.

“The black asphalt is much hotter than the white concrete sidewalk. This is due to the difference in how much solar radiation white versus black reflects. Hence, as Greenland melts more of its ice, the surface is converted from a high albedo white to darker colors. This, in turn, causes more melting and adds to the positive feedback loop.” 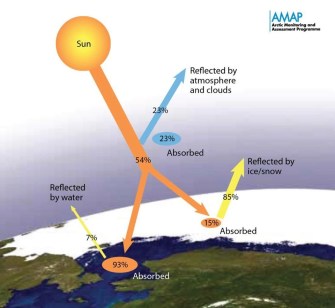 Steffen Olsen, a scientist with the Danish Meteorological Institute, got an eerie up-close look at the changing ice sheets last week. Olsen was on a routine mission to pick up weather monitoring tools on sea ice in northwest Greenland when he saw meltwater pooled up on the sheet’s surface, making it look like his sled dogs were walking on water.

Communities in #Greenland rely on the sea ice for transport, hunting and fishing. Extreme events, here flooding of the ice by abrupt onset of surface melt call for an incresed predictive capacity in the Arctic @BG10Blueaction @polarprediction @dmidkhttps://twitter.com/RasmusTonboe/status/1139504201615237120 …

“Greenland has been an increasing contributor to global sea level rise over the past two decades,” Thomas Mote, a research scientist at the University of Georgia who studies Greenland’s climate, told CNN. “And surface melting and runoff is a large portion of that.”

A floating platform the size of Rome collapsed off of Antarctica.
Hard Science

On Nov. 13, 1946, a scientist dropped crushed dry ice from a plane into supercooled stratus clouds.
Up Next
Hard Science

Permafrost is melting 70 years earlier than expected in Arctic Canada

It’s a “canary in the coalmine,” said one climate scientist.