Evidence collected from a fossil trove in Ecuador suggests that a group of ancient giant sloths met their collective demise by wallowing in their own poop in what was once a prehistoric marsh.

In a new paper published in Palaeogeography, Palaeoclimatology, Palaeoecology, a team of paleontologists from the U.S. and Ecuador reached this conclusion by piecing together clues from the remains of 22 Panamerican ground sloths (Eremotherium laurillardi) discovered in what is now the Tanque Loma tar seep on Ecuador’s southwest coast. The bones date back to 18,000 to 23,000 years ago.

An assemblage of 677 bones, 575 of which belonged to E. laurillardi, were found on this site in the Santa Elena peninsula in Ecuador. Other mammals, such as a deer, a horse, an elephant-like creature called a gomphothere, and another species of ground sloth were identified. Analysis of E. laurillardi‘s bones reveal that the sloths likely died around the same time, evidenced by the lack of sediment separating them. They were also part of a multigenerational group, including at least 15 adults, one teen, and six children. This arrangement of remains and the range of ages indicates a mass mortality event, according to the researchers.

Giant ground sloths were once one of the most common large vertebrates living in the Americas. Prior research indicates that the species, which can reach lengths of 19 feet, were widely distributed across the region ranging from southern Brazil to North America’s Gulf and Atlantic coasts. We also know that they died out 11,000 years ago. But little has been known about their behavior and social structure, which is why this latest find is so exciting.

While modern sloths are solitary creatures, the paper suggests E. laurillardi were rather gregarious creatures who congregated near water. Tanque Loma was probably once a marshy watering hole where the sloths cooled off, bathed, and quenched themselves similar to warthogs and hippopotamus populations today. 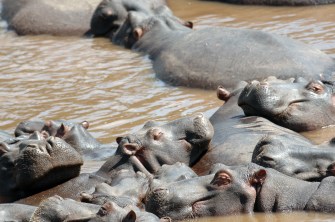 Prior analysis suggested that the asphalt on the site seeped into the sloths’ gravesite after the bones had already been deposited, thus ruling out death by asphalt poisoning. Death by volcano or other natural disaster is also unlikely because the sediments do not contain ash or charcoal. And because the sloths across a full range of age groups are present, their death probably wasn’t caused by disease or a predatory attack, either. In those cases, there would be an overrepresentation of old and young.

Rather, the researchers believe the sloths died another way.

“Taking observations from modern megafaunal ecosystems as an analogue, we suggest that this death event could have resulted from drought and/or disease stemming from the contamination of the wallow, paralleling situations observed among hippopotamus populations in watering holes on the present-day African savannah,” write the researchers in the paper.

The scientists suspect that the fate of some hippopotamus groups may point to what happened to these 22 ancient giant sloths. Hippos are apparently prolific poopers. So much so that the amount of their waste can change the chemistry of water they spend their days in to the point of sometimes killing all the fish. It can even, sometimes, kill the hippos in times of drought when the feces to water ratio shifts.

“Based on the data from this study, a modern analogue to the Tanque Loma E. laurillardi assemblage may be hippopotami, which congregate in large numbers at water sources where they spend most of their time submerged to protect themselves against heat, sun and insects,” the researchers wrote. “In times of drought, as these water sources begin to dry up, surrounding vegetation disappears and the wallows become increasingly polluted with hippopotamus faecal material, causing significant detrimental impacts on the watershed ecosystem.”

Besides bones, the team found plant material in E. laurillardi‘s fossil bed. Interestingly, this was not living plant material—it had been digested and excreted. This supports the theory that the ancient sloths met their unfortunate demise in a slop of their own feces.

Back to the drawing board.
Up Next
Life

Why nature vs. nurture is ‘zombie idea’ we need to kill

Why do some people still believe that behavior is caused solely by genes or environment? A new paper offers some answers.