The universe is full of giant planets. Like Jupiter and Saturn in our own solar system, these giant worlds may be central to the formation of life in a planetary system because their big gravitational pull vacuums up comets and asteroids that might otherwise pummel a terrestrial world like Earth. But understanding planets like Jupiter and Saturn poses significant challenges. Below their beautifully banded clouds, matter must take on new and strange forms as pressures rise far above anything encountered on or in Earth. How are scientists to explore these hidden depths?

With giant lasers, of course!

Recently, scientists used lasers the size of a football field in an innovative new study of giant planet interiors. Their goal was to shed light on one of the great mysteries of the big worlds: excess energy and the possibilities of helium rain.

Both Jupiter and Saturn are composed of about 75 percent hydrogen and 25 percent helium. But because both planets are so massive — Jupiter and Saturn weigh in at 318 and 95 times the Earth’s mass respectively — interior pressures get extreme the deeper down one goes into the planet. As the pressure rises, the hydrogen and helium atoms get squeezed so tightly that they behave in new and remarkable ways.

Below the cloud decks on both planets, hydrogen first forms a vast liquid ocean, and then, as one goes deeper, the hydrogen atoms begin locking into place and acting like a solid metal. Metallic hydrogen does not exist naturally anywhere on Earth. 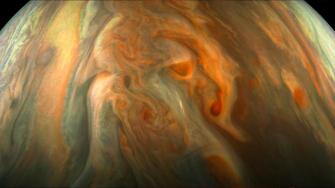 But because there are both hydrogen and helium in these planets, scientists must also consider how well mixed the two elements would be under pressures higher than at the center of the Earth. One theory says that deep inside these planets, hydrogen and helium atoms separate like oil and water. Since helium is heavier than hydrogen, if they separate, then there must be a helium “rain” falling through the interiors of the gas giants. The friction produced by such a continuous helium rainstorm through its hydrogen surroundings would generate heat, and eventually that heat would be detectable from space as radiation. That is why “helium rain” has been a leading contender for explaining why Saturn emits more energy than it gets from the sun.

But pure theory can only take scientists so far. To test the helium rain theory, researchers somehow need to get data about the real mixtures of hydrogen and helium under the crazy pressures that giant planets live with every day. While we cannot produce these kinds of pressures in a normal laboratory, we can produce them with a laser laboratory. Specifically, we can make them in a special place called the Laboratory for Laser Energetics (LLE) at the University of Rochester New York.

I am a big fan of the LLE because I have been working with researchers there for years. (I am a professor at the University of Rochester). Together, we have been pushing a field called “high energy density laboratory astrophysics” (HEDLA). The LLE’s giant 60-beam Omega laser system was designed for compressing pellets of hydrogen up to temperatures and densities where they fuse, just like inside the sun. Laser fusion is one way of hopefully producing abundant clean energy. But on the long road to get there, these lasers can also be used to bring tiny samples of matter up to astrophysically relevant conditions like those inside of a giant planet! That is what HEDLA is all about.

For insights into the helium rain problem, a sample of hydrogen mixed with helium is placed inside a tiny capsule. The capsule is then placed at the center of a three-story high, soccer-ball-shaped Omega target chamber and blasted with lasers. When the laser beams converge on the capsule, they drive a powerful shock through the hydrogen-helium mix. The gas is briefly squeezed to pressures millions of times higher than the one “atmosphere” we experience on Earth’s surface. Using sophisticated diagnostics, the team can see how the samples responded to this compression. Theoretical calculations, performed before the experiments, showed how fully mixed samples should act differently from samples in which the helium has condensed out from the mixture.

The results, published in Nature, showed that the de-mixing occurred in roughly the ways that theory had predicted. So yes, it is raining helium on Saturn, Jupiter, and (most likely) giant planets elsewhere in the universe too. There were also some important differences between the data and the calculations that should help researchers’ fine-tune their understanding of the de-mixing. This will also help our understanding of the structure of giant planets anywhere in the universe.

From my perspective, it is the mere fact that these kinds of experiments exist that really blows my mind. We still cannot travel to distant alien worlds, but our science and technology have gotten so powerful that we can recreate tiny samples of them in our laboratories using — let’s say it again — giant lasers. How cool is that?

Signals from across the universe point toward a fascinating possibility.

After 100 million nights of people asking, "What are those twinkly lights?" it is pretty remarkable that we happen to live in one of the first generations that actually knows the answer.