(Update 1/16/19: China’s state-run Xinhua News has announced that the cotton plant, which was reported to have successfully sprouted on the moon’s surface, has died as a result of dropping temperatures.)

A plant has sprouted on the moon in a Chinese probe, marking the first time a plant has grown on the lunar surface, according to an image and statements released the China National Space Administration (CNSA) on Tuesday.

The image appears to show cotton shoots successfully growing within an airtight canister aboard China’s Chang’e 4 lunar lander, which touched down on the far side of the moon on January 3. The plant is part of the mission’s “moon surface micro-ecological circle” experiment, which also includes rapeseed, potato, arabidopsis, yeast and fruit flies.

Chinese professor Liu Hanlong, head of the experiment, announced on Tuesday that the cotton seeds were the first to sprout, and also that rapeseed and potato seeds had sprouted and were growing well as of Saturday.

It’s an experiment designed to test how humans might someday grow food on lunar bases, a necessity for any long-term settlement. “We have given consideration to future survival in space. Learning about these plants’ growth in a low-gravity environment would allow us to lay the foundation for our future establishment of space base,” Hanlong told the South China Morning Post.

The micro-ecological circle in the experiment was carefully designed to withstand the harsh conditions of the moon, with the six organisms behaving synergistically as “producers, consumers and decomposers”: The plants produce the oxygen and food, sustaining the fruit flies. Meanwhile, the yeast decomposes waste from the flies and dead plants, creating more food for the insects.

The experiment shows that astronauts on future missions would likely be able to grow potatoes for food, cotton for clothing and rapeseed for oil.

It’s not the first time a plant has been grown in space. Astronauts aboard the International Space Station have successfully grown lettuce, zinnia, rice, onions, peas, cabbage, sunflower and cucumbers. What’s more, a panel of algae positioned outside of the space station managed to survive some 530 days, withstanding the vacuum and temperatures ranging from –68 to 116.96 degrees Fahrenheit during the day and night, respectively. 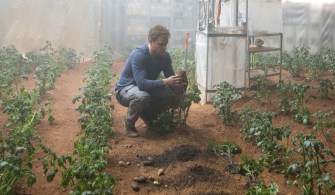 Matt Damon in The Martian, growing potatoes on Mars. The Chinese scientists have also sprouted a potato seed on the Moon in the same experiment series.

If humans are going to colonize the moon or other planets, they’re going to need a reliable and replenishable source of high-quality food. Developing the technology and skillsets required for such a food source is a major obstacle that all space agencies are working to overcome.

Obviously, it’d be much easier to plan and execute a trip to, say, Mars if space agencies could simply send astronauts off with a cache freeze-dried food that would last decades. But the quality of the nutrients and vitamins in these preserved foods degrades over time, even though the preservation process does prevent microbiological changes. That’s a problem, considering astronauts returning from a Mars mission would likely be eating freeze-dried food that’s more than five years old. That is, unless they grow their own plants.

Of course, growing fruits and vegetables requires the right amounts of oxygen, carbon dioxide, humidity, light and temperature control, and gravity — all of which can be extremely difficult to control in space. Another problem is soil: It’s necessary for plant growth, but it also takes up precious space, and plants won’t readily grow in the soil on the moon or Mars. That’s why NASA has been exploring techniques that use as little soil as possible.

In 2016, one of those experiments yielded red-romaine lettuce for the astronauts aboard the International Space Station, thanks to NASA’s plant growth system dubbed “Veggie”.

All of this said, what China has showed the world this week is important because learning how to grow plants in space, particularly extraterrestrial bodies, is necessary for the physiological health of astronauts on long-term missions. Interestingly, there’s reason to think these space gardening efforts are also important for astronauts’ psychological well-being — at least in the sense that fresh plants might, in some way, keep them connected to Earth.

“We’ve heard from a lot of astronauts who comment to the effect of, ‘I thought that I’d miss the cheeseburger or pizza the most when I came back, but what I really wanted was a fresh salad,'” Gioia Massa, a NASA scientist studying food production in space at the Kennedy Space Center, told The Verge. “So, we think having that fresh, juicy, crunchy texture in their diet can be really important.”

Dr. Sara Walker is an astrobiologist and theoretical physicist, who is questioning the very nature of life and how we’re attempting to find it elsewhere.
▸
6 min
—
with
Sara Walker
Up Next
High Culture

The Harvard psychologist loves reading authors’ rules for writing. Here are his own.