How does fire behave in zero-gravity? Scientists aboard the International Space Station are trying to answer that question through Confined Combustion, an ongoing project that involves astronauts igniting and studying flames in different low-gravity spaces.

The goal is to learn more about flame expansion in space in order to improve fire safety for spacecraft, and potentially for future settlements on the moon.

“That is the immediate and most practical goal since NASA can use the knowledge to improve material selection and fire safety strategies,” Dr. Paul Ferkul, of the Universities Space Research Association, who is working on the project, told The Guardian.

Over the past month, astronauts have burned ignited acrylic and various fabrics, examining how the flames expanded within containers of varying shape and size. The low-gravity environment not only reveals how fire spreads in space, but also how fire behaves back on Earth.

That’s because in space there’s no buoyancy effect, which describes how air rises as it’s heated. This effect explains, for example, why a candle flame points upward. But in low gravity, flames expand much differently, taking on strange spherical shapes, and spreading slowly due to low oxygen levels.

“In space, molecular diffusion draws oxygen to the flame and combustion products away from the flame at a rate 100 times slower than the buoyant flow on Earth,” Dan Dietrich, FLEX project scientist at NASA’s Glenn Research Center in Ohio, told Space.com.

Fire also burns more cooly in low gravity environments. In fact, studies have shown that the spherical shapes of space fires can give rise to “cool flames” that are invisible to the naked eye. These cool flames produce different chemical reactions than hot flames, which could someday lead to the creation of more efficient engine technologies.

“The difference and exciting part of the ISS experiments is that the typical progression on Earth is that a cool flame leads to a hot flame,” Daniel Dietrich, a NASA engineer and study co-author, told Motherboard. “The chemical by-products that form in the cool flame burn off in the hot flame. While they burn off, these low temperature or cool flame chemical reactions are of significance in that they are determine engine efficiency and pollutant formation.”

The low-gravity environment also provides a unique opportunity to study the fundamentals of combustion, which could help engineers design safer buildings and materials on Earth.

“The equations become significantly easier if we get rid of buoyancy,” Ferkul told The Guardian. “We can look at some of the underlying physics that is sometimes masked by buoyancy.” 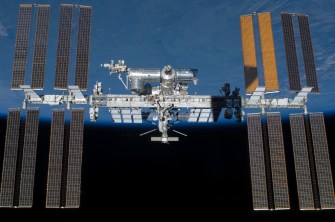 The lower buoyancy, according to past research, also means that some materials would be more flammable in low-gravity environments.

“Living on the moon is a different environment from space station and Earth, and fires will behave differently there,” Ferkul said. “There’s reason to believe that fires could be more dangerous on the Moon than on Earth.”

Reality is more distorted than we think.
▸
with
Big Think
Up Next
Hard Science

The Mars 2020 rover is set to launch in July of the same year, setting the stage for years and years of science on the Red Planet.