The European Space Agency is set to launch a satellite designed to boost the accuracy of climate-change predictions.

The main goal of the mission, called TRUTHS (Traceable Radiometry Underpinning Terrestrial- and Helio-Studies), is to precisely measure the amount of solar radiation that Earth reflects back into space. These measurements would give scientists a better idea of how much solar radiation the Earth absorbs, and it would also help answer questions about the extent to which natural variability impacts climate change. 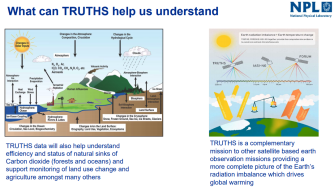 To measure solar irradiance (energy coming from the sun) and reflectances and radiances coming from Earth, TRUTHS uses a hyperspectral camera and a cryogenic radiometer. These instruments generate detailed maps of the light (visible and near-infrared) that’s reflected off the Earth’s land, oceans, and atmosphere.

TRUTHS would also calibrate climate instruments aboard other satellites. Since the 1970s, space agencies have been using space-based radiometers to measure solar energy and its effects on climate. These instruments are considerably accurate, yet many climate-change models still have a significant degree of uncertainty, for reasons including:

TRUTHS’ instruments are about 50 times more precise than earlier technologies, according to a report from the Royal Society.

Once TRUTHS is able to start generating highly detailed maps of the light Earth reflects, it would effectively establish a “climate fingerprint” against which scientists could compare future measurements.

“By doing that we’ll be able to detect subtle changes much earlier than we can with our current observing system,” Nigel Fox, a professor at Britain’s National Physical Laboratory, which is leading the initial design phase of TRUTHS, told the BBC. “This will allow us to constrain and test the climate forecast models. So we’ll know earlier whether the predicted temperatures that the models are giving us are consistent or not with the observations.”

The Royal Society report noted that boosting the accuracy of climate models is important for knowing which climate-change mitigation strategies are, or would be, effective:

“The IPCC concludes that the mix of natural variability and anthropogenic effects on decadal time scales is far from fully understood or measured, requiring significant improvements in accuracy. Unequivocal attribution and quantification of subtle fingerprint indicators from this noisy background are fundamental to our ability to predict climate reliably and use appropriate mitigation/adaptation strategies. The uncertainty in climate prediction lies in the complexity of the models, our inadequate understanding of the Earth system and its feedback mechanisms, and the relatively poor quality of available data against which to test predictions on the necessary decadal time scales.”

The member states of the European Space Agency are expected to green-light the mission for a 2026 launch. It’s expected to cost at least $275 million.

What would you do differently if you listened to your true desires?
▸
5 min
—
with
Luke Burgis
Life

Social conflicts can leave molecular marks on animals, according to recent research on the ant species Harpegnathos saltator.
Up Next
Strange Maps

Invented in 1902 by an American, the ‘Middle East’ is all over the place.