A comet that may be coming from outside our solar system has been discovered. If confirmed, this would be second interstellar object ever identified, with the first one being ‘Oumuamua, found in 2017.

The new comet, dubbed C/2019 Q4 (Borisov), was discovered by the Ukrainian amateur astronomer Gennady Borisov at the MARGO observatory in Nauchnij, Crimea on August 30th, 2019. Since the find, the origins of the unusual space rock, which doesn’t seem to have a circular or elliptical orbit, have been debated by the astronomers.

The object’s so-called eccentricity, one of its key orbital parameters, has been measured by the Minor Planet Center to be more than three, which means it has an arc-shaped trajectory. 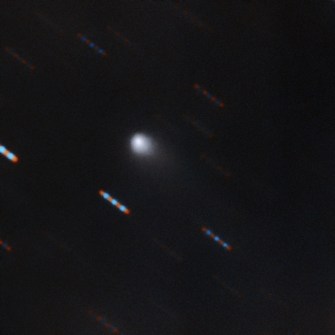 Gemini Observatory two-color composite image of C/2019 Q4 (Borisov). Blue and red dashes show background stars which seem to streak due to the motion of the comet.

One other eye-popping indicator that serves as the clue to the comet’s interstellar origins is its high velocity of about 93,000 miles per hour (or 150,000 kph). That’s too fast to be pulled in by the sun’s gravity and also means that the object is probably just passing through.

Davide Farnocchia of NASA’s Center for Near-Earth Object Studies at JPL says the velocity is significantly above other objects that orbit the Sun this far away. “The high velocity indicates not only that the object likely originated from outside our solar system, but also that it will leave and head back to interstellar space,” pointed out Farnocchia.

Borisov’s comet is not likely to come close to Earth, currently about 260 million miles away from our Sun. At its closest point to Earth (or perihelion), it’s still projected to stay as far as 190 million miles, farther than the orbit of Mars.

How do we know this is even a comet? From the coma – its fuzzy looks, which are indicative of the object having a central icy body with a cloud of dust and particles surrounding it on approach to the Sun, which is heating it up, reports NASA’s press release. The nucleus of the comet is estimated to be between 1.2 and 10 miles (2 and 16 kilometers) in diameter.

Tags
astronomycosmosnasaplanetsspacesuntelescopeuniverse
In this article
astronomycosmosnasaplanetsspacesuntelescopeuniverse
Related
The Universe in 90 minutes: The Multiverse, time, free will, God, & more
Everything you ever wanted to know about the Universe, explained by physicist Sean Carroll.
▸
1:33:47 min
—
with
Sean Carroll
Life
“I went to space and discovered an enormous lie”
What astronaut Ron Garan saw in space changed his life forever – here’s what it taught him.
▸
8 min
—
with
Ron Garan
Hard Science
10 paradoxes that will stretch your mind
From time-traveling billiard balls to information-destroying black holes, the world’s got plenty of puzzles that are hard to wrap your head around.
Videos
The true story behind Carl Sagan’s cult classic, Contact
Do aliens dream about meeting us, too?
▸
with
Jill Tarter
Videos
NASA astronaut explains humanity’s trajectory to Mars
The first human that isn’t an Earthling could be in our lifetime.
▸
5 min
—
with
Robert Curbeam
Up Next
Think Again Podcasts
Etgar Keret (writer) – a tunnel dug under the prison floor
Etgar Keret’s stories are as funny, painful, and surreal as life itself. We talk about the craziness of his native Israel, his new collection of short stories FLY ALREADY, marijuana, dementia, and much more.