After more than fifty years of stargazing, debate, and controversy, scientists have confirmed the existence of two “moons” or “pseudo-satellites” made of dust orbiting the Earth. Though the clever use of mathematics, they also argue that the location of these dust clouds gives them some unique characteristics.

Artist’s impression of the Kordylewski cloud in the night sky (with its brightness greatly enhanced) at the time of the observations.

The Kordylewski clouds are two dust clouds first observed by Polish astronomer Kazimierz Kordylewski in 1961. They are situated at two of the Lagrange points in Earth’s orbit. These points are locations where the gravity of two objects, such as the Earth and the Moon or a planet and the Sun, equals the centripetal required to orbit the objects while staying in the same relative position. There are five of these spots between the Earth and Moon. The clouds rest at what are called points four and five, forming a triangle with the clouds and the Earth at the three corners.

The clouds are enormous, taking up the same space in the night sky as twenty lunar discs; covering an area of 45,000 miles. They are roughly 250,000 miles away, about the same distance from us as the Moon. They are entirely comprised of specks of dust which reflect the light of the sun so faintly most astronomers that looked for them were unable to see them at all.

The clouds themselves are probably ancient, but the model that the scientists created to learn about them suggests that the individual dust particles that comprise them can be blown away by solar wind and replaced by the dust from other cosmic sources like comet tails. This means that the clouds hardly move but are eternally changing. 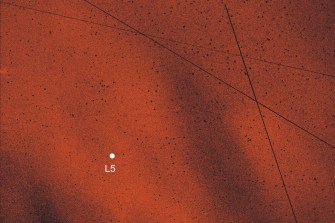 “In this picture the central region of the Kordylewski dust cloud is visible (bright red pixels). The straight tilted lines are traces of satellites.”

How did they discover this?

In their study published in the Monthly Notices of the Royal Astronomical Society, Hungarian astronomers Judit Slíz-Balogh, András Barta, and Gábor Horváth described how they were able to find the dust clouds using polarized lenses.

Since the clouds were expected to polarize the light that bounces off of them, by configuring the telescopes to look for this kind of light the clouds were much easier to spot. What the scientists observed, polarized light in patterns that extended outside the view of the telescope lens, was in line with the predictions of their mathematical model and ruled out other possible sources. 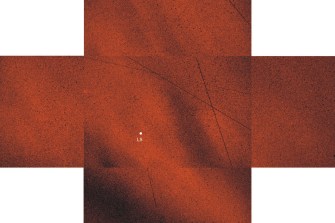 “Mosaic pattern of the angle of polarization around the L5 point (white dot) of the Earth-Moon system. The five rectangular windows correspond to the imaging telescope with which the patterns of the Kordylewski cloud were measured.”

Why are we just learning this now?

The objects, being dust clouds, are very faint and hard to see. While Kordylewski observed them in 1961, other astronomers have looked there and given mixed reports over the following decades. This discouraged many astronomers from joining the search, as study co-author Judit Slíz-Balogh explained, “The Kordylewski clouds are two of the toughest objects to find, and though they are as close to Earth as the Moon are largely overlooked by researchers in astronomy. It is intriguing to confirm that our planet has dusty pseudo-satellites in orbit alongside our lunar neighbor.”

Will this have any impact on space travel?

Lagrange points have been put forward as excellent locations for a space station or satellites like the James Webb Telescope to be put into orbit, as they would require little fuel to stay in place. Knowing about a massive dust cloud that could damage sensitive equipment already being there could save money and lives in the future. While we only know about the clouds at Lagrange points four and five right now, the study’s authors suggest there could be more at the other points.

While the discovery of a couple of dust clouds might not seem all that impressive, it is the result of a half-century of astronomical and mathematical work and reminds us that wonders are still hidden in our cosmic backyard. While you might never need to worry about these clouds again, there is nothing wrong with looking at the sky with wonder at the strange and fantastic things we can discover.

A new model addresses a longstanding problem: where do quasars get the fuel they need to outshine entire galaxies?
Up Next
Think Again Podcasts

For two decades she’s traveled the world, photographing humans in crisis. Pulitzer and MacArthur winning photojournalist Lynsey Addario on what it’s all taught her.