Chengdu, the capital of Sichuan province in China, may soon have a second moon. In an interview with China Daily, Wu Chengfeng, the head of the Tian Fu New Area Science Society, described plans to construct an artificial moon to launch into Earth’s orbit.

Why build a second moon when the one we already have works perfectly fine? Aside from “because we can,” the artificial moon will be covered in a reflective coating to deflect sunlight back to Earth, producing a “dusk-like glow,” albeit one that is eight-times brighter than that of the natural moon. 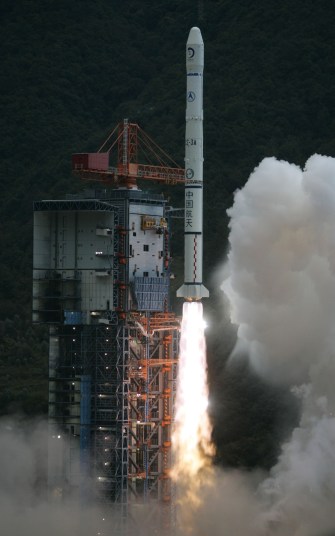 The 2007 launch of China’s first lunar probe from the Xichang Satelitte Launch Center. In 2020, China plans to put its artificial moon into orbit from the same launch site.

A night-light in the sky

In theory, this will help cut down on electricity used to power streetlights in Chengdu, saving $174 million dollars annually. More importantly, the artificial moon will help illuminate areas during blackouts from natural disasters or other emergencies. “But this is not enough to light up the entire night sky,” said Wu. “It’s expected brightness, in the eyes of humans, is around one-fifth of normal streetlights.”

The artificial moon will hover about 310 miles above the surface of the Earth, much closer than the moon’s 238,900 miles. If it works, an area 50 miles in diameter will be illuminated by the gentle glow of the new moon.

Depending on the success of the project, China plans to launch three more moons in 2022 to ensure that at least one is always in the best position to reflect sunlight. The luminosity of these artificial moons will be adjustable, and they can be shut off if need be. Together, the three moons will be capable of illuminating up to 2,470 square miles.

Despite how impressive this project is, it could have a significant impact on local wildlife. Many species rely on the moon to cue certain behaviors. Sea turtles, for instance, wait for full moons before laying their eggs, and coral reefs crank up their reproductive activities. Although Chengdu has neither sea turtles nor coral reefs, it’s unclear what effect several artificial moons will have on local wildlife.

What’s more, the extra illumination may contribute to an existing problem. In addition to ruining the aesthetic of the night sky, light pollution seriously mucks with our circadian rhythm. This disruption means that people in highly light-polluted areas get worse sleep and, as a result, be more susceptible to illness such as obesity, diabetes, and mood disorders.

However, Wu told China Daily that he and his team will only conduct their tests in an uninhabited desert, that way the light beams will not interfere with any people or Earth-based space observation equipment. “When the satellite is in operation,” he said, “people will see only a bright star above, and not a giant moon as imagined.”

The Soviet Union attempted a similar project in the 1990s when they launched a satellite named Znamya (or Banner) into orbit. The giant space mirror was intended to lengthen daylight hours and provide extra energy for solar power, but it burned up during reentry. Ultimately, the Soviets decided the project was too costly. However, given recent advances in space technology, the Chinese may just succeed where the Soviets failed.

Tags
citiesEngineeringfuturepollutionrocket sciencespace
In this article
citiesEngineeringfuturepollutionrocket sciencespace
Related
Life
“I went to space and discovered an enormous lie”
What astronaut Ron Garan saw in space changed his life forever – here’s what it taught him.
▸
8 min
—
with
Ron Garan
The Present
Is geo-tracking your child the new “helicopter parenting”?
“My dad asked me if I had been to tutoring and I lied… Then he showed me the tablet.”
The Well
A futurist sets the stage for the next 1,000 years
We don’t need one Elon Musk. We need 8 billion empathic futurists.
▸
8 min
—
with
Ari Wallach
The Present
How meth and fentanyl homogenized the illegal drug supply
The larger truth on the streets is that no one uses just one drug anymore.
Strange Maps
America’s early love affair with Antiquity still shows on this map
There are nearly 100 towns named “Troy.”
Up Next
The Present
South African city to seize private land without paying in ‘test case’
“Expropriation without compensation” is meant to address the nation’s stark inequalities in wealth and land ownership.