Scientists have created a method to convert carbon dioxide back into solid coal, a breakthrough that could change the ways carbon is removed from the atmosphere and permanently stored.

It’s one of several recently developed negative emissions techniques that seek to make carbon capture and storage cheaper, safer and more efficient. This particular method was developed by a research team led by RMIT University in Melbourne, Australia, and it uses a liquid metal electrocatalyst, containing nanoparticles of the rare-earth metal cerium, to convert the greenhouse gas into a stable, coal-like solid.

“While we can’t literally turn back time, turning carbon dioxide back into coal and burying it back in the ground is a bit like rewinding the emissions clock,” study co-author Dr. Torben Daeneke told The Independent. “To date, CO2 has only been converted into a solid at extremely high temperatures, making it industrially unviable.” 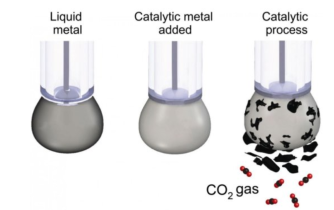 Publishing their findings in the journal Nature Communicationson February 26, the team described how carbon dioxide turned into solid flakes after it was dissolved and placed inside a beaker filled with an electrolyte liquid and liquid metal that were charged with an electrical current.

“By using liquid metals as a catalyst, we’ve shown it’s possible to turn the gas back into carbon at room temperature, in a process that’s efficient and scalable,” Daeneke said.

Instead of being buried underground, the solid carbon produced by the method could be used as a fuel source or as feedstock, as the element is in other carbon utilization approaches.

“A side benefit of the process is that the carbon can hold electrical charge, becoming a supercapacitor, so it could potentially be used as a component in future vehicles,” Dorna Esrafilzadeh, a Vice-Chancellor’s Research Fellow in RMIT’s School of Engineering, told The Independent. “The process also produces synthetic fuel as a by-product, which could also have industrial applications.”

The ability to sell or otherwise use carbon after removing it from the atmosphere would help make carbon capture and storage methods more cost-effective, and therefore more scalable. Currently, only about 1 percent of carbon emissions are removed from the atmosphere and stored. Making it cheaper to do so could help the global community remove the 100 billion to 1 trillion tons of carbon necessary to avoid catastrophic global warming by mid-century, a number put forth by the United Nations Intergovernmental Panel on Climate Change.

Tags
climate changeenvironmentinnovationscience
In this article
climate changeenvironmentinnovationscience
Related
The Present
The “maritime Indiana Jones” who salvages shipwrecks now wants to tow icebergs
Simple physics makes hauling vast ice chunks thousands of miles fiendishly difficult — but not impossible.
The Well
Can we condition ourselves to be heroes?
Neuroscientist Robert Sapolsky on the science of temptation, and the limitations of your brain’s frontal cortex.
▸
6 min
—
with
Robert M Sapolsky
The Future
How a device transmits radio waves with almost no power
Apart from the energy needed to flip the switch, no other energy is needed to transmit the information.
Life
Strange life forms create an “alien” ecosystem in an abandoned uranium mine
Slimy biofilms made up of bacterial and eukaryotic life forms have taken over an abandoned, flooded uranium mine in Germany.
The Present
Climate change is altering the chemistry of wine
Smoke taint from wildfires is gross, even to wine amateurs.
Up Next
The Past
The mystery behind Minoan bull-leaping
Did a poorly understood ancient civilization somersault over charging bulls?