If most stars form in binary pairs, what about our Sun? A new paper presents a model supporting the theory that the Sun may have started out as one member of a temporary binary system. There’s a certain elegance to the idea — if it’s true, this origin story could resolve some vexing solar-system puzzles, among them the genesis of the Oort Cloud, and the presence of massive captured objects like a Planet Nine.

The paper is published in Astrophysical Journal Letters. 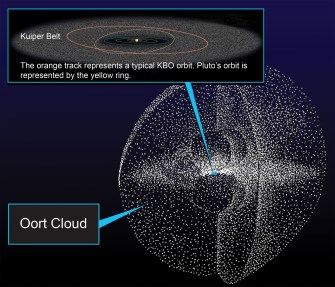 Scientist believe that surrounding the generally flat solar system is a spherical shell comprised of more than a trillion icy objects more than a mile wide. This is the Oort cloud, and it’s likely the source of our solar system’s long-term comets — objects that take 200 years or more to orbit the Sun. Inside that shell and surrounding the planets is the Kuiper Belt, a flat disk of scattered objects considered the source of shorter-term comets.

Long-term comets come at us from all directions and astronomers at first suspected their origins to be random. However, it turns out their likely trajectories lead back to a shared aphelion between 2,000 astronomical units (AU) from the Sun to about 100,000 AU, with their different points of origin revealing the shell shape of the Oort cloud along that common aphelion. (An astronomical unit is the distance from the Sun to the Earth.)

No object in the Oort cloud has been directly observed, though Voyager 1 and 2, New Horizons, and Pioneer 10 and 11 are all en route. (The cloud is so far away that all five of the craft will be dead by the time they get there.) To derive a clearer view of the Oort cloud absent actually imagery, scientists utilize computer models based on planetary orbits, solar-system formation simulations, and comet trajectories.

It’s generally assumed that the Oort cloud is comprised of debris from the formation of the solar system and neighboring systems, stuff from other systems that we somehow captured. However, says paper co-author Amir Siraj of Harvard, “previous models have had difficulty producing the expected ratio between scattered disk objects and outer Oort cloud objects.” As an answer to that, he says, “the binary capture model offers significant improvement and refinement, which is seemingly obvious in retrospect: most sun-like stars are born with binary companions.”

“Binary systems are far more efficient at capturing objects than are single stars,” co-author Ari Loeb, also of Harvard, explains. “If the Oort cloud formed as [indirectly] observed, it would imply that the sun did in fact have a companion of similar mass that was lost before the sun left its birth cluster.”

Working out the source of the objects in the Oort cloud is more than just an interesting astronomical riddle, says Siraj. “Objects in the outer Oort Cloud may have played important roles in Earth’s history, such as possibly delivering water to Earth and causing the extinction of the dinosaurs. Understanding their origins is important.” 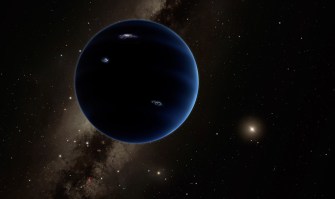 The gravitational pull resulting from a binary companion to the Sun may also help explain another intriguing phenomenon: the warping of orbital paths either by something big beyond Pluto — a Planet 9, perhaps — or smaller trans-Neptunian objects closer in, at the outer edges of the Kuiper Belt.

“The puzzle is not only regarding the Oort clouds, but also extreme trans-Neptunian objects, like the potential Planet Nine,” Loeb says. “It is unclear where they came from, and our new model predicts that there should be more objects with a similar orbital orientation to [a] Planet Nine.”

The authors are looking forward to the upcoming Vera C. Rubin Observatory (VRO) , a Large Synoptic Survey Telescope expected to capture its first light from the cosmos in 2021. It’s expected that the VRO will definitively confirm or dismiss the existence of Planet 9. Siraj says, “If the VRO verifies the existence of Planet Nine, and a captured origin, and also finds a population of similarly captured dwarf planets, then the binary model will be favored over the lone stellar history that has been long-assumed.”

Lord and Siraj consider it unsurprising that we see no clear sign of the Sun’s former companion at this point. Says Loeb, “Passing stars in the birth cluster would have removed the companion from the sun through their gravitational influence. He adds that, “Before the loss of the binary, however, the solar system already would have captured its outer envelope of objects, namely the Oort cloud and the Planet Nine population.”

So, where’d it go? Siraj answers, “The sun’s long-lost companion could now be anywhere in the Milky Way.”

Tags
cosmosphysicsplanetsspacesununiverse
In this article
cosmosphysicsplanetsspacesununiverse
Related
The Well
This is what the fourth dimension looks like
Left–Right, Back–Forth, Up–Down. What’s the fourth dimension?
▸
3 min
—
with
Brian Greene
The physics of entropy and the origin of life
How did complex systems emerge from chaos? Physicist Sean Carroll explains.
▸
6 min
—
with
Sean Carroll
The Universe in 90 minutes: The Multiverse, time, free will, God, & more
Everything you ever wanted to know about the Universe, explained by physicist Sean Carroll.
▸
1:33:47 min
—
with
Sean Carroll
Life
“I went to space and discovered an enormous lie”
What astronaut Ron Garan saw in space changed his life forever – here’s what it taught him.
▸
8 min
—
with
Ron Garan
Videos
The true story behind Carl Sagan’s cult classic, Contact
Do aliens dream about meeting us, too?
▸
with
Jill Tarter
Up Next
Starts With A Bang
A Spacetime Surprise: Time Isn’t Just Another Dimension
It’s fundamentally different from space. Here’s how.Here’s a question that most of us have been asked at some point in our lives, “what’s the shortest distance between two points?” By default, […]