When bacteria encounter a virus, bacteriophage, they extract a snippet of the invader’s genes and hang onto them so that they can recognize and re-defeat it should they encounter it again in the future. After a while, a bacteria carries a collection of its greatest hits, so to speak, arranged in the order in which they were encountered. These collections can be passed down to their descendants. Bacteria can also exchange genetic material with their other bacteria they come in contact with.

Now, there’s new evidence, published in Royal Society on March 25, that they’re somehow sharing genes globally as well. The best guess is that bacteria are taking to the air and winging this precious information around the world.

The evidence is pretty compelling

The study examined the genetic makeup of several Thermus thermophilus communities across the globe: in gravel on Italy’s Mount Vesuvius and hot springs on Mount Etna, as well as from hot springs in northern and southern Chile and Kamchatka, Russia. The similarities they found were stunning: Not only did the bacteria contain genetic registries of the same bacteriophages, but they were even in the same order, a clear indication that they’d been shared.

Senior author of the study, Konstantin Severinov of Rutgers, says, “What we found… is that there were plenty of shared memories — identical pieces of viral DNA stored in the same order in the DNA of bacteria from distant hot springs.” 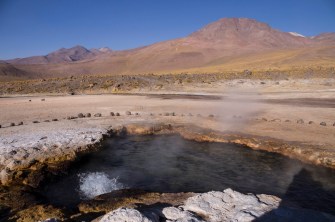 One of the study’s hot springs, this one in the El Tatio region in northern Chile — and there go some bacteria skyward. Photo credit: Yaroslav Ispolatov

Obviously, this raises the question of how on earth bacteria are doing this. There’s some kind of planet-wide mechanism, what the authors call an “air bridge,” at work. “They must be transported by air, and this movement must be very extensive so bacteria in isolated places share common characteristics,” says Severinov. There’s no other plausible explanation so far, he says: “Because the bacteria we study live in very hot water – about 160° F (71° C) – in remote places, it is not feasible to imagine that animals, birds or humans transport them.”

Earlier research found that bacteria, and viruses, do go airborne, heading aloft on various particles blown skyward — apparently billions fall from the skies and onto us every day, some from thousands of miles away. But what would be the value in all this air travel? Now we likely know: Bacteria are international couriers of genetic material that can save bacterial lives.

Resistance in the air

This finding may have disturbing ramifications for the growing bacterial, and possibly viral, resistance to antibiotics. If genetic defenses against them can spread so quickly and far, the problem may be even more dire than we thought. Says Severinov, “Our analysis may inform ecological and epidemiological studies of harmful bacteria that globally share antibiotic resistance genes.”

The discovery could help astronauts find better ways to grow food in space.
13.8

Three lines of evidence point to the idea of complex, multicellular alien life being a wild goose chase. But are we clever enough to know?
Hard Science

Starling flocks, schools of fish, and clouds of insects all agree.
Life

For the first time, it was discovered that nonphotosynthetic bacteria have a circadian clock.
Health

A new antibiotic hits germs with a two pronged attack.
Up Next
The Present

7 climate change projects that are changing the game

While there’s plenty to be worried about, it’s important to remember that we’re making progress, too.