Astrophysicists discovered a very rare planetary system 897 light years away which features two exoplanets orbiting their star backwards. This unexpected arrangement is due to the tilting of the protoplanetary disk in which the planets were formed.

The researchers found that the two planets in the K2-290 system orbit around the star in almost the opposite direction as the star’s rotation around its own axis. In our Solar System, by comparison, all the planets revolve in the same direction as the rotation of the Sun. K2-290 A’s rotational axis is tilted by approximately 124 degrees in contrast to the orbits of the planets.

The international research team was led by Maria Hjorth and Simon Albrecht from the Stellar Astrophysics Centre of Aarhus University in Denmark, and also involved scientists from Princeton University, Pennsylvania State University, University of Toronto, and Tokyo Institute of Technology.

This actually isn’t the first time a “backwards” planetary system like this has been spotted. One was sighted over 10 years ago. But, as one of the study’s authors Joshua Winn from Princeton University explained in a press release, “this is a rare case in which we think we know what caused the drastic misalignment, and the explanation is different from what researchers have assumed might have happened in the other systems.” 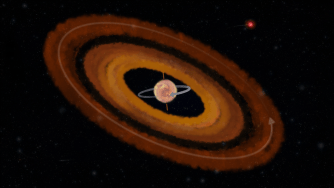 The unusual formation of the planets was caused by the protoplanetary disk – a disk of material that spins around a young star for several million years after the star’s birth. Normally, this spin is going in the same direction as the star but the gravitational force from a neighboring star can tilt the disk, which is what happened in this case.

Another author, PhD student Emil Knudstrup from Aarhus University, shared what drew him to this work:

“The idea that planets travel on wildly misaligned orbits has fascinated me throughout my graduate study. It is one thing to predict the existence of these crazy orbits, so very different from what we see in the Solar System. It is quite another thing to participate in actually finding them!”

Check out the paper “A backward-spinning star with two coplanar planets” published in the Proceedings of the National Academy of Sciences (PNAS).

By studying the dwarf galaxy Wolf-Lundmark-Melotte ~3 million light-years away, JWST reveals the Universe’s star-forming history firsthand.
Starts With A Bang

We confidently state that the Universe is known to be 13.8 billion years old, with an uncertainty of just 1%. Here’s how we know.
Starts With A Bang

Be thankful for an out-of-equilibrium Universe

Every time our Universe cools below a critical threshold, we fall out of equilibrium. That’s the best thing that ever happened to us.
Starts With A Bang

How low-mass black holes bend space the most

The strongest tests of curved space are only possible around the lowest-mass black holes of all. Their small event horizons are the key.
Starts With A Bang

Have we found the Milky Way’s twin?

Our galactic home in the cosmos — the Milky Way — is only one of many trillions of galaxies within in the observable Universe. Do we have a twin?
Up Next
Health