Astronomers discovered that extreme tidal loss may be a possible explanation for why some galaxies seem to have no dark matter, a mystery type of matter that’s supposed to take up to 27 percent of the universe, according to NASA. Dark energy takes up another 68 percent, creating a repulsive force that speeds up the universe’s expansion. Neither has been directly seen so far but rather inferred through their effects on space.

The team from the University of California, Riverside, found anomalies in some smaller galaxies, known as “dwarf galaxies” (containing up to a billion stars, compared to the Milky Way’s 200-400 billion). Some appear to have no dark matter at all. This is despite the fact that they were formed in galaxies that were teeming with dark matter previously. What is the explanation for this phenomenon, which muddies our understanding of dark matter?

The scientists used a cosmological simulation called Illustris on dark-matter-free galaxies DF2 and DF4. They wanted to understand how similar space objects would evolve and what might have happened that led them to lose dark matter. The simulation could create galaxies, with evolving stars, supernovas, and growing and merging black holes. Within the simulation, the researchers found “dwarf galaxies” similar to DF2 and DF4 which lost over 90 percent of their dark matter through the process of tidal stripping, in which material is stripped from the galaxy by galactic tidal forces.

“Interestingly, the same mechanism of tidal stripping is able to explain other properties of dwarfs like DF2 and DF4 — for example, the fact that they are ‘ultradiffuse’ galaxies,” said Sales. “Our simulations suggest a combined solution to both the structure of these dwarfs and their low dark matter content. Possibly, extreme tidal mass loss in otherwise normal dwarf galaxies is how ultradiffuse objects are formed.”

Besides Sales and Doppel, the study involved Julio F. Navarro from the University of Victoria in Canada, Mario G. Abadi and Felipe Ramos-Almendares of the National University of Córdoba in Argentina, Eric W. Peng of Peking University in China, and Elisa Toloba of the University of the Pacific in California. 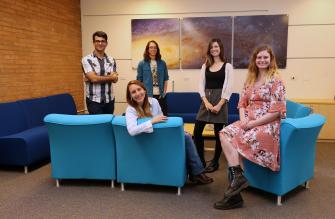 Sales’s team is currently collaborating with the Max Planck Institute for Astrophysics in Germany to improve the simulations with more advanced physics and a resolution that’s 16 times better than the Illustris they used on this study.

Check out the new paper, published in the Monthly Notices of the Royal Astronomical Society.

Tags
astronomycosmosdark energydark matterphysicsplanetsspaceSpace & Astrophysicsuniverse
In this article
astronomycosmosdark energydark matterphysicsplanetsspaceSpace & Astrophysicsuniverse
Related
Starts With A Bang
The path forward for astronomers and native Hawaiians
A history of injustice and the greatest natural location for ground-based telescopes have long been at odds. Here’s how the healing begins.
The Well
This is what the fourth dimension looks like
Left–Right, Back–Forth, Up–Down. What’s the fourth dimension?
▸
3 min
—
with
Brian Greene
Starts With A Bang
JWST’s hunt for most distant galaxies gets double boost
Along with gravitational lensing and ALMA’s incredible long-wavelength spectroscopy, JWST is reshaping our view of the early Universe.
13.8
Why the origin of life and the Universe itself might be forever unknowable
There might be a hard limit to our knowledge of the Universe.
Hard Science
Without this genius optical trick, those gigantic telescopes aren’t any better than the one in your backyard
Size matters, but it’s not the only thing.
Up Next
Hard Science
One billion galaxies: Astronomers unveil largest sky map ever made
Scientists with the the Dark Energy Spectroscopic Instrument (DESI) Legacy Imaging Surveys spent six years creating a detailed map of more than 1 billion galaxies.