The scientists first overlooked this galaxy, dubbed Dragonfly 44, because while it’s very large (nearly the size of the Milky Way), it’s also very dim and has relatively few stars.

“Very soon after its discovery, we realized this galaxy had to be more than meets the eye. It has so few stars that it would quickly be ripped apart unless something was holding it together,” said Pieter van Dokkum.

By using some of the world’s most powerful telescopes at the Keck Observatory in Hawaii and by analyzing star velocities, the astronomers came to a startling conclusion.

“Amazingly, the stars move at velocities that are far greater than expected for such a dim galaxy. It means that Dragonfly 44 has a huge amount of unseen mass,” said the research paper’s co-author Roberto Abraham of the University of Toronto.

How much mass exactly?

The scientists estimate Dragonfly 44’s mass to be similar to the Milky Way’s at 1 trillion times the mass of the Sun or more precisely 2 tredecillion kilograms (which is a 2 followed by 42 zeros). That’s a lot of zeroes!

But only 1% of this mass is made up stars and “normal” matter. The rest of it seems made of dark matter. 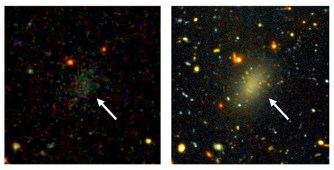 The dark galaxy Dragonfly 44. The image on the left is from the Sloan Digital Sky Survey. Only a faint smudge is visible. The image on the right is a long exposure with the Gemini telescope, revealing a large, elongated object. Dragonfly 44 is very faint for its mass and consists almost entirely of dark matter. (Images by Pieter van Dokkum, Roberto Abraham, Gemini, Sloan Digital Sky Survey)

What dark matter is no one knows for sure. It’s hypothesized to make up 85-90% of the universe.

“We have no idea how galaxies like Dragonfly 44 could have formed,” pointed out Abraham. “The Gemini data show that a relatively large fraction of the stars is in the form of very compact clusters, and that is probably an important clue. But at the moment we’re just guessing.”

There have been other galaxies found that seem to be made mostly of dark matter, but this new one is about 10,000 times more massive than any of them.

Next on the agenda? Figure out the nature of dark matter.

“This has big implications for the study of Dark Matter. It helps to have objects that are almost entirely made of Dark Matter so we don’t get confused by stars and all the other things that galaxies have. The only such galaxies we had to study before were tiny. This finding opens up a whole new class of massive objects that we can study.Ultimately what we really want to learn is what dark matter is. The race is on to find massive dark galaxies that are even closer to us than Dragonfly 44, so we can look for feeble signals that may reveal a dark matter particle,” explained Professor Van Dokkum.

Notably, studies on the mysterious dark matter have recently revealed a potential fifth force of nature.

You can read the research paper on Dragonfly 44 here, in the Astrophysical Journal Letters.

A new model addresses a longstanding problem: where do quasars get the fuel they need to outshine entire galaxies?
Up Next
Surprising Science

Can We Learn to Be More Comfortable in Our Bodies?

Can the art of communal bathing teach us to be more social animals?