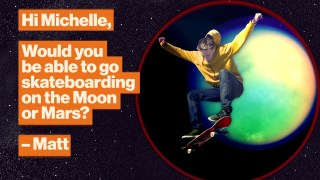 Always dreamed of flying? On these moons, you can.

There are places in our solar system where you can fly.
▸
2 min
—
with
Michelle Thaller

MICHELLE THALLER: Matt, you asked the question, can we go skateboarding on the moon or Mars? Or would this be more of a hoverboard scenario. Well, both the moon and Mars have a weaker surface gravity than the Earth does, so you don't weigh as much on the moon or Mars as you do here. But there still is enough gravity to stick you to the surface, so I think you could actually stay on your board and keep it down. You probably wouldn't accelerate as fast as you do here on Earth, so, for example, on earth you'd be going down a hill picking up speed. On the Moon and Mars, the gravity is weaker, so you wouldn't be picking up as much speed. So, in fact, skateboarding might be a little bit dull on the moon and Mars.

The good thing is that if you fall over, you also don't fall with the same force you would from the gravity of the Earth. So you'd probably be a bit safer. But the question actually kind of has got me thinking about what sort of sports you could do on some of the worlds in our solar system that you just could not do here at all. And there are several places in the solar system that have relatively low surface gravity. The gravity isn't as strong as here on the surface of the Earth, but they have thick atmospheres. There's a moon called Titan that orbits Saturn, and Titan's a really big object. I mean, physically, it's actually not that much smaller than the planet Mars. Titan's gravity isn't as strong as Earth's, but the atmosphere is actually thicker.

There's actually a little more air pressure on Titan than there is here on Earth. It's a very different sort of air. There's no oxygen. It's actually mostly nitrogen, a little bit of carbon dioxide. So you couldn't breathe. You'd have to bring a breathing apparatus. It's also very cold. It's about 300 degrees below zero. But if you had a really super-duper parka and you had a breathing apparatus, you could actually survive on the surface of Titan. There's air pressure. With air pressure and low gravity, you could actually strap large wings to your arms. I mean, imagine wings made of some wonderful, flexible metal, maybe like titanium. And if you jumped off a cliff, you could fly.

You could actually start flapping your wings and actually getting lift. And you could fly, just yourself, jumping off a cliff on Titan, and flying around in that thicker atmosphere. And there are other places where you have relatively low gravity but giant cliffs. For example, there's a moon of Uranus called Miranda, and Miranda has cliffs that are many miles high. So, you could jump off a cliff and fall very slowly and very gently down to the bottom. If you think about the idea of feather falling. That's something from Dungeons and Dragons, you can fall very carefully and not actually hurt yourself. There might be sport on Miranda like skydiving, but you don't need a parachute. You just float down very gently and land.