As far as famous equations go, none are more known than Einstein’s E=mc2. This insight by Einstein that relates mass and energy has been linked to the creation of a new kind of physics and the birth of the atomic age.

Leonard Susskind, professor of theoretical physics at Stanford University, and one of the founders of string theory, has proposed a new equation that may have an equally transformative effect.

The letters in the equation actually stand for the names of a few heavyweights from the world of physics.

“ER” means Einstein and Nathan Rosen, and, in particular, evokes a 1935 paper they wrote describing wormholes (aka “Einstein-Rosen bridges”), which are essentially tunnels between different times and spaces in the Universe.

“EPR” stands for Einstein, Rosen and Boris Podolsky, who together wrote another seminal 1935 paper, this time on quantum entanglement, the proposed phenomenon whereby “entangled” particles can influence each other at great distances.

You might’ve noticed that Einstein is on both sides of this equation, a testament to the influence his ideas continue to have on physics. However, neither Einstein nor his co-writers, saw their papers on wormholes and quantum entanglement as describing the same thing. But that is exactly what Susskind is proposing. 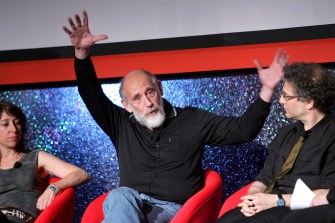 The unifying equation was actually first described in the paper by Susskind and physicist Juan Maldacena in 2013, but Susskind just published a paper describing the implications of such insight. In his new paper on the subject, Susskind writes:

What Susskind implies is that entangled particles may be connected by something like quantum wormholes. In fact, even black holes can be connected via wormholes.

This kind of thinking leads to the idea that, as writes Tom Siegfried in “Science News”:

“Since wormholes are contortions of spacetime geometry — described by Einstein’s gravitational equations — identifying them with quantum entanglement would forge a link between gravity and quantum mechanics.”

As physicists are eager to find a way to explain some of the inherent weirdness of quantum mechanics and reconcile it with general relativity, Susskind’s possible realization that “quantum mechanics and gravity are far more tightly related than we (or at least I) had ever imagined” is leading other scientists to consider ER=EPR in a growing number of papers.

You can watch a lecture where Susskind discusses ER=EPR here:

Tags
einsteinequationleonard susskindphysicswormhole
In this article
einsteinequationleonard susskindphysicswormhole
Related
The Well
This is what the fourth dimension looks like
Left–Right, Back–Forth, Up–Down. What’s the fourth dimension?
▸
3 min
—
with
Brian Greene
The physics of entropy and the origin of life
How did complex systems emerge from chaos? Physicist Sean Carroll explains.
▸
6 min
—
with
Sean Carroll
The Universe in 90 minutes: The Multiverse, time, free will, God, & more
Everything you ever wanted to know about the Universe, explained by physicist Sean Carroll.
▸
1:33:47 min
—
with
Sean Carroll
13.8
The boundaries between sciences
Nature is a whole. The sciences should be, too.
Thinking
How the brain’s left hemisphere “mesmerizes” us into misunderstanding reality
If we are wreaking havoc on ourselves and the world, it is because we have become mesmerized by a mechanistic, reductionist way of thinking.
Up Next
Strange Maps
A Children’s Map of the World
As this stark map shows, domestic violence against children is still legal in most of the world.