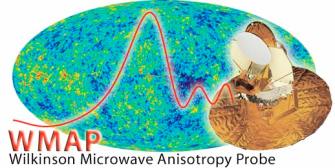 NASA’s $150-million, Wilkinson Microwave Anisotrophy Probe (WMAP) has been gathering information about the nature of our Universe for nine years and has changed the way we think about it forever.  It has provided us with some fascinating information, mapping the Cosmic Microwave Background (CMB) radiation; producing the first full-sky map of the microwave sky; determining the age of the Universe to be 13.73 billion years old; determining that dark matter makes up 23.3% of the universe, dark energy makes up 72.1% with the remainder of 4.6% being baryonic matter (normal atoms); and backing up the notion that the Universe went through an extremely rapid growth phase within the first trillionth of a second (inflation).

The Guinness Book of World Records awarded the WMAP’s efforts in identifying it as “the most accurate measure of the age of the Universe”. In addition, since the year 2000 the three most highly cited papers in all of astronomy and physics were derived from data we received from the WMAP. In some ways, this amazing scientific instrument has been like a time machine, allowing us to examine some of the oldest light in our Universe—opening windows that we previously could only imagine.

Officials at NASA announced in an Oct. 6th press release that the primary mission of conducting surveys of the cosmic background radiation is over. The principle investigator of the WMAP mission, Charles Bennett, states that “the WMAP has accomplished far more than their initial science objectives, and now the time has come for a responsible conclusion to the satellites operations.” The satellite officially captured its final set of science data on the 20th of August, fired it’s thrusters for the very last time, and pushed into its final resting orbit around our sun sometime on the 8th of September.

The WMAP forever opened our eyes, but there will surely be more satellites with different missions (like the James Webb Space Telescope that will serve as Hubble’s replacement) which will continue to give us ever more jaw-dropping images of the Universe. As the WMAP will continues orbiting the sun in retirement, it will serve as a constant reminder of the spectacular job it has done.

Goodbye WMAP—you will surely be missed!

We don’t need one Elon Musk. We need 8 billion empathic futurists.
▸
8 min
—
with
Ari Wallach
Up Next
Guest Thinkers

This year Californians will vote on a ballot proposition that would legalize the sale and possession of small amounts of marijuana for personal use. Democrats around the country will be […]