There has been some discussion over the years here on Eruptions about what might happen if you were to bomb an eruption volcano. Now, this might be to divert a lava flow, to stop an eruption to prevent an eruption from occurring, but overall, people seem to love the idea that shear human force could prevent a volcanic disaster. Maybe we have Hollywood to blame for this – there are quite a few examples of people putting bombs in volcanoes to start/stop an eruption and hey, it sounds daring. It is the sort of last ditch, hail Mary attempt at averting disaster that makes good (and by that I mean bad) cinema.

So, why am I going to talk about bombing volcanoes? Well, because it is exciting.

First off, I have never heard or could find any evidence of any attempt to bomb a volcano to stop it from erupting – you know, the idea that if you were to bomb it, the volcano would go from looking like it was going to erupt to going back to silence. Not one. Ever. Why? Well, mostly because it would never work. First off, most magmatic systems are kilometers below the surface of the Earth, so to cause any real disruption (and thus prevention of eruption) as to stop an impending eruption, you would need some sort of nuclear device – and even that might be insufficient … and nuking a volcano is kind of like chopping one’s finger off to stop a hangnail. If you get it wrong, you’re spreading radiation that could be doubly dispersed in volcano ash. No sane geologist would ever advocate such action. Even the so-called “bunker buster” conventional bombs would like not disrupt a magmatic system and, in fact, most likely cause the volcano to erupt, rather than stop it. Remember, once the signs appear that suggest a volcano might erupt, a rapid release of pressure is what is needed to get an explosive eruption to occur, just the sort of thing that bombing a volcano might induce (like a supposed plan to bomb volcanoes in Japan into erupting during World War II). 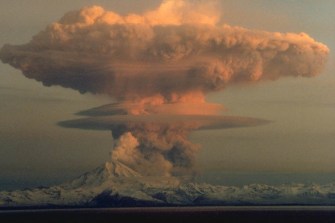 No, we didn’t nuke Redoubt – but volcanic ash plumes can resemble the classic “mushroom cloud” of a nuclear blast.

So, that is off the table. Sorry folks, bombing a volcano isn’t going to stop an eruption. Then why bomb a volcano in the first place?

I poked around have found only a very few examples of bombing a volcanic eruption and the United States was involved in every one – at least three times in Hawai`i and once in Italy at Etna. The former was bombing with live ordnance – bombs – while the Etna example was “bombing” with concrete blocks. All of these attempts were to divert flowing lava rather than to stop an eruption.

Earthen barriers (on left) attempt to divert lava flows from Etna in 1992.

In the case of Mt. Etna, the bombing occurred during the 1992 activity at the volcano. The lava from the eruption was threatening some important structures on Etna including an astronomical observatory, so a plan was developed to try to divert the lava from the town. Barriers were constructed to keep the lava from flowing into the town – mostly by constructing earthen barriers to keep the lava from heading in the directions that it shouldn’t. This had worked before during the 1983 eruptions that Etna and might have saved Italy between $2-22 million dollars – and it was one of the first time that humans were able to actively intervene during a volcanic eruption (along with the successful 1973 diversion at Heimaey in Iceland). In 1992, lava flows threatened Zafferana Etnea, a small town on the flanks of Etna. This time attempts to divert the lava (see above) included dropping concrete blocks on the lava flows so as to block it from flowing towards the town. The plan was to blow a hole in a lava tube at higher elevations and then fill the lava tube with concrete blocks (see below)to stop the flow of lava in the tube. Once lava can move down a lava tube, it is very well insulated – so much so that the lava inside the tube can stay hot and move quickly downslope, to the point where it can actually thermally eroded (melt) the bottom and sides of the lava tube, thus making it bigger. By punching a hole in the tube and filling it with debris, the hope was to stop this from occurring. The “bombing” of the flow was a mixed success – it was unclear how much the diversion actually worked, but the towns were spared – but the question of whether diverting lava flows at Etna is a good idea is still up in the air. 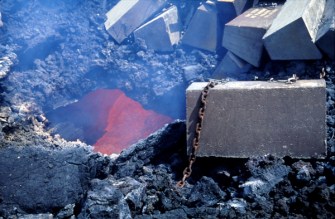 Concrete blocks dropped near a skylight in a lava tube at Etna during the 1992 eruption. Image courtesy of Claude Grandpey.

The other example was from Mauna Loa in Hawai`i. Many people forget that the Big Island in Hawai`i is home to not just one active volcano (Kilauea), but three – Hualalai and Mauna Loa (and even Mauna Kea, although it likely hasn’t erupted in a few thousand years). In fact, Mauna Loa was very active during the middle of the 20th century and erupted as recently as 1984. Mauna Loa is a much larger threat to the people of the Big Island as well – the northeast Rift Zone of the volcano is close to the city of Hilo (see map below), there have been times when lava flows from Mauna Loa threatened the city, its water supply or ecologically-fragile rain forests on the slopes of the volcano.

Map of the historic lava flows and hazard zones for Mauna Loa. Image courtesy of HVO/USGS.

Lockwood and Torgerson (1980) is an excellent look at what happens when you try to bomb a volcano with active ordnance to attempt to divert lava flows. In fact, as early as 1881 has the idea of using man-made explosions to stop lava flows been suggested at Mauna Loa. The U.S. has tried to bomb Mauna Loa while it was erupting at least twice in the last 100 years and a series of tests were run in the 1970s to determine the best course of action if lava flows from Mauna Loa threatened Hilo again. Overall, it appears that in limited situations, targeted bombing campaigns on vulnerable parts of the volcano – mainly spatter cones that are the source of lava tubes high on the slopes of Mauna Loa – might cause sufficient diversion as to prevent lava flows from reaching Hilo.

Lockwood and Torgerson (1980) mention two attempts to bomb the volcano while it was actively erupting – once in 1935 (here is some video of that campaign) and once in 1942, during World War II. Both attempts yielding no noticeable results, but some of the evidence of the bombing campaign can still be found in the form of small craters in lava flows (usually less than 10 m across) or in bombs coated in basaltic glass (see below). Now, both of these bombing attempts were performed using antiquated (at the time) bombs, and even though the pilots of the bombers reported “sheets of red, molten rock thrown up 200 feet”, the lava flows were unaffected (but both ended relatively soon afterwards by causes unrelated to the bombing). Both of these attempts were centered around the idea that bombing lava tubes could disrupt the flow of lava and force it to exit the tube system far upslope from settlements, thus causing the lava to flow harmless on the volcano’s upper flanks. 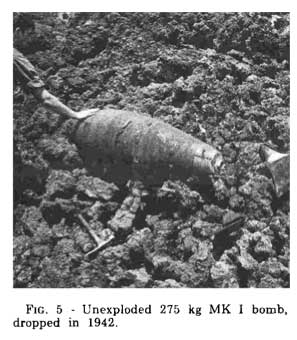 An unexploded bomb on Mauna Loa. Image from Lockwood and Torgerson, 1980.

In the 1970s, some tests were conducted by the U.S. Air Force and HVO scientists to see what might be the most effective means of bombing if the goal is to divert a lava flow. These tests (see image below) were on an older lava field with no active lava flows and were performed using relatively modern (for the 70s) ordnance. What was found was that if you target spatter cones that feed lava tube systems, then lava flow disruption – where the surface was most fragile and not dense, solid rocks like above some lava tubes. Bombing the actual lava tubes or flow levees didn’t seem to be very effective. Interestingly, the bombing did show signs of widespread effects, with cracks found in the lava up to 10 meters from the actual crater and disruption of the hardened lava surface as far as 50 meters away.

The study came to some conclusions that I hadn’t really considering when it comes to bombing lava flows, especially in Hawai`i. On the plus side, many times lava flows near the summit area at Mauna Loa occur on government lands, so bombing could occur without disruption of private property. Also, bombing the flow to divert lava is a relatively low cost endeavor, especially relative to the cost of lava flows reaching populated area. However, on the negative side, bombing Hawaiian volcanoes is bound to cause native Hawaiians some consternation as the bombing could be perceived as an affront to Pele. In a more practical sense, not all eruptions will have obvious vulnerable spots to bottom and indiscriminate bombing of lava flows could have unintended effects. 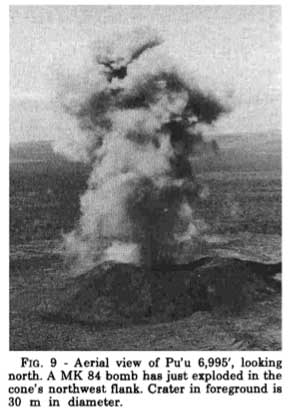 Plume from a test bombing of an old lava flow on Mauna Loa, performed in 1975. Image from Lockwood and Torgerson, 1980.

There you have it – bombing a volcano to divert lava flows could work – but only if you pick the right place. This isn’t a matter of just dropping the largest bomb you can find and hope for the best. In fact, Lockwood and Torgerson (1980) say that lava tube disruption could be accomplished, if the target it picked correctly, with as little as a single 900-kg conventional bomb. This means close cooperation between the military and volcanologists to find the right spot to bomb. It might not be as exciting as racing to get that thermonuclear weapon down the gullet of a volcano in the nick of time to save Seattle from Rainier, but likely a whole lot more effective (in those cases where lava flows are your biggest threat).

Top left: Lowering a nuclear bomb into a Pacific volcano in order to start an eruption in 1965’s “Crack in the World“.

Could Russia’s plan actually destroy demand for natural gas?
Starts With A Bang

At four million solar masses, the Milky Way’s supermassive black hole is quite small for a galaxy its size. Did we lose the original?
Health

To the ancient Greeks, exotic animals were proof of mythological creatures. To the ancient Romans, they were oddities and adversaries.
Up Next
Guest Thinkers

Lifting the Veil on Organic Labels

In a guest post today, Samantha Miller digs deeper into understanding the nature of labeling in the organic food market.  Miller is a graduate student in Journalism at American University. […]