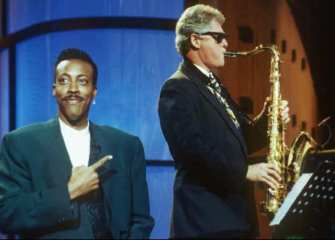 Say what? Fred Thompson is launching his presidential candidacy on Jay Leno? In today’s fragmented media world, it’s a smart move. As the political scientist Matt Baum describes in a recent study, and as I have detailed on this blog many times, with so many media choices, audiences without a preference for political information are tuning out hard news and instead spending their media time with entertainment and infotainment media.

When candidates go on late night comedy, they reach the limited number of “persuadables” left in the electorate, non-news audiences who have few other sources of information about the candidate. The Clinton campaign pioneered the method in 1992 with his now iconic appearance on the Arsenio Hall Show. Today, late night comedy and day time talk shows are more critical for candidates than ever before.

On these programs, candidates are usually able to offer their best personal narrative, and hopefully in the process, prime memories of likability and strong character. The appearance on a late night show can also generate positive news coverage and positive buzz at the office, on blogs, or among friends.

And that’s exactly the goal of the Thompson campaign. As detailed yesterday at the Washington Post, Thompson’s appearance on Jay Leno coincides with his first presidential campaign ad, set to appear on the major networks at midnight, with the ad ending by directing viewers to Thompson’s web site:

In a 30-second campaign commercial sent to networks for broadcast at midnight, Thompson warns that “On the next President’s watch, our country will make decisions that will affect our lives and our families far into the future. We can’t allow ourselves to become a weaker, less prosperous and more divided nation.”

Thompson concludes the ad with an invitation to visit his new campaign website, Fred08.com, on Thursday to watch a 15-minute video in which he officially announces his campaign for the White House. But if there is any doubt, an announcer then comes on, saying: “Fred Thompson, Republican for President.”

The ad will air throughout the day today and during the New Hampshire Republican presidential debate on Fox tonight. Following the debate — which Thompson is skipping — he will appear on Jay Leno’s “Tonight Show.”

The idea, advisers say, is to create a national buzz about Thompson’s official entry into the race and drive traffic to the new website on Thursday. The 15-minute video will be available on the website at 12:01 a.m. Thursday morning; advisers hope it steals the show the next morning on talk shows and cable news networks.

“The goal between now and the minute Senator Thompson is on Jay Leno is to drive as many people as we can to our website in anticipation of the launch video,” said Communications Director Todd Harris.

At Science, Four Letters on Framing and Our Reply

Science has published four letters in response to our framing article along with a fifth letter as our reply. As it turns out, I know two of the correspondents fairly […]