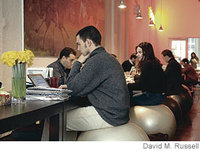 There’s a tendency in certain circles to think of creativity and innovation as something that can be artificially created by introducing all kinds of cool-looking toys and doodads into the office. It all started with foosball tables, lava lamps and scooters in Silicon Valley, but now it looks like “staid employers” are also embracing some of these toys and gimmicks. As the Wall Street Journal explains, the latest creativity fad is the use of exercise balls instead of chairs in the office. (Yep, big, round bouncing balls that sell for less than $25!) Apparently, those annoying rubber balls that were such a big hit in the gym are now finding their way into the office:

People have searched for the perfect office chair for decades,

one comfortable, adjustable and easy on the back. Now some professionals are

Long used by fitness buffs and physical-therapy patients, those

into an increasing number of workplaces as a seating option.

Google, a company that prides itself on its unconventional office

culture, displays several balls on its campus in a recruitment video available

online. But more-staid employers, including

employees to bring in balls or ball chairs for personal use as well.

Manufacturers and distributors report that sales of the balls are up sharply.

They even made an appearance on the TV show “The Office,” when one character,

irritated by the incessant bouncing, stabs a colleague’s ball.

Employees claim that these rubber balls are more comfortable than regular chairs, that they promote better posture and that they make them feel younger and more creative. As one Connecticut-based HR manager points out, “It kind of reminded me of when I was a kid…” (Maybe this is what she had in mind?) Call me small-minded, but I’m perfectly happy with the latest from Herman Miller.