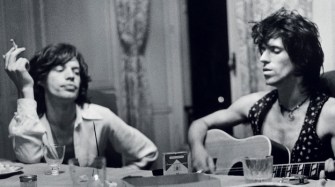 Of late, I’ve been fascinated by the “back story” behind the creative process, especially with the factors that drive innovators to succeed with any creative project. With the re-release of the Rolling Stones’ Exile on Main Street album today and the upcoming release of the Stones in Exile documentary film (now screening at Cannes), new facts and details are coming to light about that magical one month back in 1972 in the south of France, when the Rolling Stones famously recorded their legendary album at Keith Richards’ French villa.

So what can we learn from this creative “back story” of the Rolling Stones in exile? For me, there are several lessons for innovators who, for one reason or another, find themselves exiles on Main Street:

(1) Sometimes your most innovative work takes place when your back is up against the wall. In 1972, the Rolling Stones were fleeing tax problems, looming legal issues and all the complications of debauchery-fueled rock ‘n’ roll. Yet, they produced some of their greatest work, including some all-time classics, when given some very real constraints. It’s a common story that start-up entrepreneurs tell about bootstrapping their business during unforgiving economic periods — when forced to do more with less, they actually end up producing some of their best work. As we emerge from the worst financial crisis since the Great Depression, I’m sure we’ll see and hear more about these types of bootstrapping success stories.

(2) For inspiration on a particularly tough innovation problem, try revisiting some of your earlier work. In the process of re-mastering and re-releasing the Exile on Main Street album, it became clear that some of the “outtakes” on the album actually comprised some of their best work. Mick Jagger, in revisiting his prior work, expected that the outtakes would be “unfinished and slovenly.” What he found, however, was that some of the songs were actually “finished and controlled.” Sometimes, it’s just the passage of time that gives you a new perspective on your work.

(3) Implementing an elaborate system for innovation may actually reduce the level of innovation in your organization. Many companies attempt to establish rigorous criteria, milestones and stage-gates for any innovation to get to market. What the Rolling Stones did in one month, though, was extraordinary. They threw this kind of caution to the wind. Instead, they took the approach that they’d jam for a full month, see what happens, and then keep only the 10 “best” songs. By some accounts, there was a “24-hour party” going on upstairs at the mansion, while members of the band were trying to work downstairs. Going back through the archives, it turns out that there were at least ten additional songs that now have the potential to become instant classics.

When you attempt to innovate within your organization, sometimes you’ll find yourself an exile on Main Street and, quite possibly, an exile on Wall Street. And that’s when you may find yourself producing your best, most innovative work.