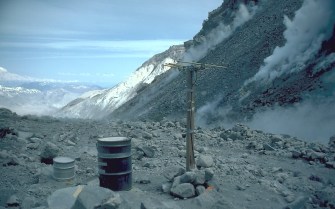 Last night I had the opportunity to see a talk given by YVO Scientist-in-Charge Dr. Jake Lowenstern as part of the Volcanological Society of Sacramento meeting and he gave a great talk on the state of volcano monitoring today in the U.S. He laid out a lot of details concerning the Volcano Hazards Program of the USGS and I thought I’d share some of them so we can all have an idea of the ups and downs of the VHP these days.

First off, nothing says fun like the U.S. Volcano Status Map! Apparently the dreaded watch “eye” was not meant to be a permanent icon, but hey, it has been there for years now, so the “eye” may be here to stay.

The VHP was set up via the Stafford Act to monitoring and mitigation volcanic eruption. Its budget is ~$23 million out of the annual U.S. Federal Budget (so, roughly 0.0012%). This covers the five volcano observatories (Alaska, Cascades, Hawai’i, Long Valley and Yellowstone) along with scientists in the program at the USGS Menlo Park offices.

There are 169 “active” volcanoes in the U.S., at least according to the count down by the VHP, putting the U.S. as the 3rd most volcanically-populated country in the world*. How does a group like the VHP deal with assessing the relative hazard of these volcanoes? Well, in 2005, the USGS released Open File Report 2005-1164, a.k.a. “An Assessment of Volcanic Threat and Monitoring Capabilities in the United States: Framework for a National Volcano Early Warning System” (which you can download from the site linked above). This lists and ranks the “active” volcanoes in the U.S. according to the potential hazards they pose to the country. It also lays the groundwork for the new volcano warning system (NVEWS).

This NVEWS will be the basis for volcano monitoring in the 21st century. It has five parts:

4. extramural grants for research with academia

The nuts and bolts are being worked out right now, but much of the plan is already developed. This goes well with the recently introduced Senate Bill S.782 that calls for an official establishment of a National Volcano Early Warning and Monitoring System. The bill is being sponsored by Alaska Senators Lisa Murkowski and Mark Begich and was the direct result of (a) Bobby Jindal’s infamous “volcano monitoring” comment and (b) the eruption of Redoubt this spring.

Speaking of Bobby Jindal and his comments, where he got $140 million for monitoring in the stimulus is anyone’s guess. That is the figure for the whole USGS and monitoring gets $15.2 million of that. Mr. Jindal, may I introduce you to “fact checking”. Anyway, roughly half of those ARRA dollars will be going to AVO. One interesting issue with the stimulus money going to monitoring is that there is (a) not enough instruments like seismometers to purchase and (b) many of the seismometers needed, like broadband stations, do not have an American manufacturer. These are just a couple of the problems that have come up as the stimulus money begins to get spent and the rules for its spending are fleshed out.

Finally, I asked Dr. Lowenstern about the places most in need of increased monitoring and (unsurprisingly), the answer was the Cascades, specifically places like Mt. Shasta and Glacier Peak. Ironically, it isn’t staff or money that is the biggest problem, but rather the permissions and legal issues that make it difficult. For example, Jake pointed out that Glacier Peak is in a National Wilderness, so that to put up a single seismic station in the Wilderness might take years of negotiating and planning with the U.S. Forest Service to allow the USGS to put one in. The same might be said for other parts of the Cascades where the National Park Services, Bureau of Land Management and Indian nation all control the land where seismic stations would need to be located.

You can begin to get the idea of the difficulties of managing the “volcano monitoring” for a nation as chock full o’ volcanoes as the United States. However, with increased funding and the potential of the establishment of the National Volcano Early Warning System, the U.S. is still well in the forefront of monitoring and mitigation for volcanic eruptions.

Either the eruption at Fernandina has kicked back up again, or, based on the accompanying photo, we’ve landed on Gliese 581 D.