Nick Bilton‘s I Live in the Future & Here’s How it Works (Crown/Random House) has just been released. It’s a contemporary memoir of the New York Times tech correspondent and his path from the day he furtively called the subscriptions department from his own office at the same newspaper to cancel his print subscription to his confident search for new ways to bring the “Gray Lady” world-leading content to a new generation. 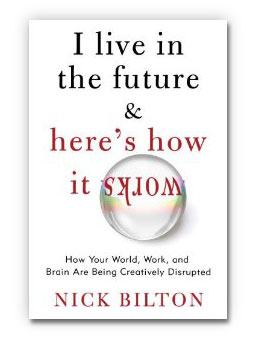 Interestingly, there is not a single technology mentioned in I Live in the Future that doesn’t exist today. The book is much more about how his own psychological adaptation to a technology saturated world is more or less painlessly doable for all of us, and will be for our own good. He urges readers to trust the new digital information marketplace just like we have come to trust ATM machines. He also offers his own riposte to Nicholas Carr’s much debated essay “Is Google Making Us Stupid?” Throughout the book, Bilton demonstrates a deep confidence in the power of the individual to make their own best choices, best captured in his phrase and chapter titled “Me Economics.” We agree with his treatment of multi-tasking, seeing it more as a lifestyle that increases the efficiency of making choices rather than a mental burden that necessarily diminishes the quality of everything we do.

Bilton’s style is colloquial and entertaining; he is relaxed and easy-going, and the book reads like a genuine conversation between himself and the reader, as well as offering funny anecdotes of his conversations with his wife, colleagues, and experts. The most useful part of Bilton’s book are the final chapters which lay out an integrated vision of emerging technologies and habits – smaller screens, paying for experiences, participatory story-telling, and personalized content – which make the near future seem not only palatable, but possible and desirable. Bilton is therefore a good guide to the next 2-3 years, if not the next twenty.

Back from the Smokies

I’m back from Denison Geosciences Department Field Trip the Smokies of Tennessee and North Carolina – I’m exhausted but it was a great trip for all.And just for fun, anybody […]