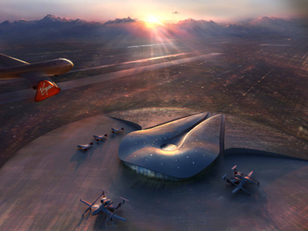 As Chad Farneth of Readymade News points out, Virgin Galactic’s plan to establish a spaceport in the New Mexico desert is starting to kick into high gear:

“The state of New Mexico and Virgin Galactic have unveiled design concepts of the first Spaceport to be used for commercial flights. On 4 September, the designs

were revealed for a project that is to begin construction in 2008. A

design team comprised of American and British   architects and

designers combined to submit the winning design that was unveiled last

week during a ceremony sponsored by the New Mexico Spaceport Authority

(NMSA). There is clearly a market for individuals to become “space

tourists”, and it appears Virgin and NMSA have an initial offering for

those with deep pockets and grand dreams.”

It’s hard to believe, but within a few years, the dream of space tourism could become a reality!

The most innovative B-schools in America

The Wall Street Journal recently ranked the best business schools in America according to a number of criteria, including a list of the 10 MBA programs that produce the most […]