Trypanophobia – the extreme, irrational fear of needles – is said to affect 10% of American adults. And then there are the merely squeamish ones, for whom getting a shot may not be a panic-attack-inducing experience, but is certainly an unpleasant one. Now, a new flu vaccine patch developed by researchers at Emory University and engineers at the Georgia Institute of Technology may alleviate the needle-averse.

The patch is covered in 100 “microneedles” filled with a freeze-dried version of the flu vaccine, so small they don’t hurt. Both the fluid and the patch itself dissolve into the skin within minutes. 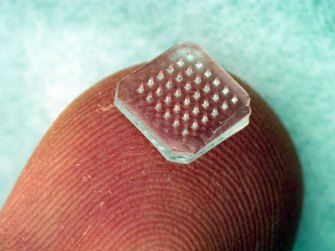 Though only tested on mice so far, the patch offers much promise for humans. According to Mark Prausnitz, the lead chemical engineer on the project, our bodies are wired to expect first contact with pathogens on the surface – the skin, nose and digestive tract – so a vaccine administered right there, rather than injected deep-tissue in a muscle, may actually be more effective than a needle-based one.

The patch is particularly promising for the developing world, where it offers not only an easy, compact, even self-serve way of delivering vaccines, but also a sustainable, virtually waste-free way of disposing of them.

Prausnitz believes the technology is ready for human implementation and is currently seeking funding.

Classes of Impossibilities & The Internet in your Contact Lenses