3-D printing and rapid prototyping have been among the hottest trends in design innovation this year. But Urbee, a two-passenger hybrid vehicle whose entire body has been generated using a 3-D additive manufacturing process, ups the ante on what this technology can offer.

A collaboration between transportation and product design outfit KOR Ecologic and rapid prototyping service Stratasys, Urbee was designed for the 2010 Progressive Automotive X-Prize competition to build the world’s most energy-efficient vehicle and while Urbee didn’t win the $10 million, it does offer significant energy efficiency – up to 200 mpg on the highway and 100 mpg in the city, running on either gasoline or ethanol. 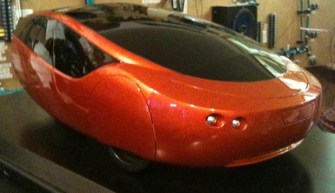 Skyway, an early predecessor to Urbee designed by KOR, dates back to 1994, promising a pedal-powered alternative to cars weighing only 80 pounds and capable of moving at 35 mph. We were also promised jetpacks that year.

What Ted Sorenson Did For Your Country