Driving or walking down the street to a supermarket is not a problem for the majority of the United States. With this one action, most households are able to purchase and consume healthy, nutritious foods for reasonable prices. While this seems like the norm to most, not everyone has the capabilities or the capital to fulfill this simple day to day task.

What are Food Deserts?

According to the 2008 Farm Bill, Food deserts are “areas in the Untied States with limited access to affordable and nutritious food, particularly such an area composed of predominantly lower income neighborhoods and communities.”  Today, more than 23.5 million Americans, including 6.5 million children currently live in food deserts, located both in the inner city and rural communities.  Many scientists have suggested that food deserts negatively affect health outcomes, especially for children whose development depends on a well-balanced, nutritious diet. While some researchers believe there is a link between access to affordable, nutritious food and the intake of those foods, other studies show that even after access to such food increases, unhealthy choices continue to persist for the affected consumers.

Below, a figure from a USDA report illustrates the food desert situation within the Washington D.C. Metro area. Dark outlines represent area defined as low income, and the circles represent areas that lie within a one-mile radius of a grocery store. Shading corresponds to the number of people living in the area; the darker the color, the higher the population. 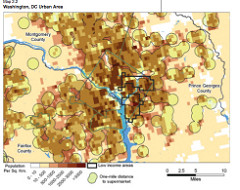 Access to healthy food, that is also affordable, is a challenge for many resident living within the district. In particular residents living within Wards 7 and 8, which also have the city’s highest obesity rates and are home to the largest food deserts within D.C., have access to only seven full-service grocery stores. Residents in Ward 4 only have access to two.  By contrast, residents living in Ward 3, the highest-income Ward, have access to eleven full-service grocery stores (DChunger.com).

Healthful food is scarce in Washington’s inner city. Much of the food comes from corner markets and various take-out and fast food restaurants. The National Academy of Sciences reported last year that within food deserts, families typically shop at convenience stores overflowing with high-fat snacks, soda, alcohol and cigarettes, which are marked up in price. Based on these results, connections can also be made with increased health risk; the highest levels of obesity exist within the city’s two Wards east of the Anacostia, where poverty is greatest and access to grocery stores is the worst.

What is Being Done?

Over the years, more and more attention has been received on the issue of food deserts across the United States. As part of the “Lets Move!” Campaign to end childhood obesity, First Lady Michelle Obama is taking on the issue food deserts, creating a $400 million-a-year program to encourage the establishment of supermarkets across the nation. The administration’s initiative will try to increase investments to expand healthy food options into as many as one-fifth of the nation’s food deserts, which will also create thousands of jobs in urban and rural communities.

— Guest post by Melissa Winn, an undergraduate majoring in Environmental Science at American University, Washington, D.C.  This post is part of the course “Science, Environment, and the Media” taught by Professor Matthew Nisbet in the School of Communication at American.  See also other posts on the food policy by Winn and members of her project team.