The seemingly constantly restless Tungurahua had a significant explosive eruption, prompting evacuations of schools and villages near the volcano. Tungurahua produced a 7 km / ~23,000 foot ash plume, which is a bit surprising considering that last report from Instituto Geofisico in Ecuador from January 2011 reported “activity at Tungurahua continued to decrease and ash was absent from plumes.” This eruption clearly shows that the volcano has roared back to a period of activity – you can read some of the details on the IG update for the current eruption (Spanish), including reports of 6 explosions in the last day and severe ground shaking in the town of Banos near the volcano. Hugo Yepes, a geologist from the IG, was quoted as saying (Spanish) this eruption was one of the largest at the volcano in the past 11 years and that the IG expects that this eruption might gone on for “several days”. The Ecuadoran government placed the volcano on Orange Alert status, meaning mandatory evacuations for a number of villages near Tungurahua. Some air traffic in and out of Quito has also been effected by the eruption. There are a number of webcams trained on Tungurahua, so you can try to check out the activity through the clouds yourself. 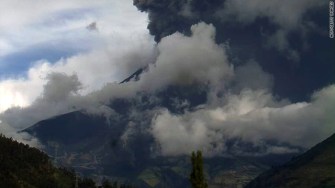 Clouds partially obscure the eruptive plume at Tungurahua in Ecuador in late April 2011.

Top left: The eruptive plume from Tungurahua seen on April 27, 2011.

In Guantánamo Files, the New York Times coverage of Guantánamo from WikiLeaks documents, one piece in particular caught my attention: a discussion of the difficulty of judging detainees’ risk of […]