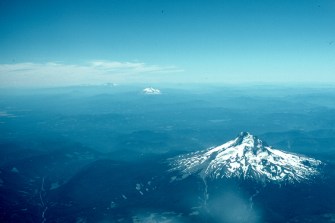 The BBC is reporting today on a study published in Earth and Planetary Science Letters that attempts to establish a connection between large earthquakes and subsequent volcanic eruptions. The study is focussed on large Chilean earthquakes over the last 200 years (Chile has had some of the biggest, hitting M9 on the Richter Scale) and then examining the number of volcanic eruptions that followed. They find that activity increased in the year after the earthquakes. This suggests that many volcanoes might be “primed” to erupt and just need a catalyst like a large seismic event to promote eruption.

This effect was seen as far as 500 km from the epicenter of the earthquake, which makes for some fascinating speculations for future volcano predictions. For instance, what happens when we have the next big Cascadia subduction zone earthquake in the Pacific northwest? The last major one was in 1700 (and yes, if you read Fire Mountains of the West, it does seem like the Cascades were much more active in the 18th and 19th centuries), so when the next one rolls around, might we expect more activity from the many potentially active Cascade volcanoes. The key to understanding this will be to discover what exactly does it mean for a volcano to be “primed” for eruption – in other words, where does the magma have to be in the system, what thermal condition should the magma be in, what amount of melt has to be present, how degassed can the magma be, how close to the epicenter is the volcano, what sort of shaking did it experience? These are just the first few questions that popped into my head concerning this connection. As usual, more work needs to be done to understand how robust this volcano-earthquake connection might be and how might it work.