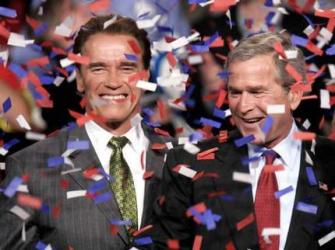 The Washington Post chronicles Arnold Schwarzenegger’s efforts to frame his environmentalism in “public health” terms. The Governerator explains his position in ways only he can. For example, he compares California’s lead on global warming to the state’s pivotal role in popularizing bodybuilding back in the 1970s.

With Senators Boxer and Feinstein pitching Federal legislation modeled after California, Schwarzenegger says he is ready to travel to DC to testify in support of the bill, creating a possible major showdown with the Bush administration.

There’s no escaping the death of loved ones. But that doesn’t mean we’re powerless in the wake of loss.
Up Next
Guest Thinkers