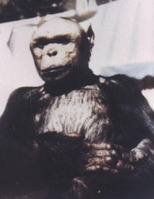 Given this blog’s focus on business evolution and the DNA of innovation, I couldn’t resist this: Oliver the Humanzee. Recently featured on the Paranormal Insider blog, Oliver was a sort of chimp-human hybrid that never quite evolved the way he was supposed to:

“Oliver was odd for a chimpanzee. He looked different than most other

apes, with his hairless face, light eyes, and a tendency to walk

upright. According to the Burgers, he preferred the company of humans

to that of his fellow apes; he enjoyed drinking beer and watching

television with them, and would occasionally help out with chores

around the house. With the Burgers, Oliver made appearances on the Ed

attracted to human females, and had to be sold when he became a threat

Methinks Oliver the Humanzee might just be an apt metaphor for the type of business executive that tries to evolve — but just can’t seem to make it to the next step. Instead, he (or she!) sits around, drinks beer with the troops, occasionally helps out, but mainly just causes all sorts of problems for the business organization. Eventually, he or she is upsized, rightsized, or outsourced away.