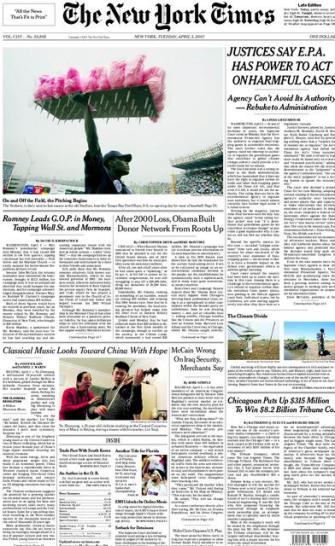 Back in February, I described how the first release of the IPCC was a massive communication failure, never really landing on the wider media or public agenda. In a column at Skeptical Inquirer Online, I described alternative strategies for reaching Americans.

As the next IPCC release arrives on Friday, the New York Times has marshaled its journalistic resources in its best attempt to make sure that global warming places third behind the war and the 2008 horse race in terms of media and public attention. For the second time in three days, the Times leads with news about the issue. On Sunday, an Andrew Revkin report on the moral duty to the developing world topped the right hand corner of the front page, and today headlines blare in the same spot announcing the partisan-tinged decision at the Supreme Court. Tagged below the lead story is a teaser on the Science Times report by Revkin and colleagues that continues to chronicle the plight of the developing world. It’s a globe spanning series that I think Revkin, as the nation’s best reporter on climate change, would like to believe offers inconvenient truths for just about everyone. The article is a carefully crafted narrative that blends a moral call to arms with a humanizing portrayal of the people most likely to be affected by the greenhouse emissions of the U.S. and the rest of the developed world.

Left Behind: As Fewer Americans Identify with GOP, “Republicans” as Measured in Polls Appear More Resistant to Changing Their Views on Science

As I have detailed at Framing Science many times, over the past five years, as Democrats and Independents have shifted their views in support of embryonic stem cell research and […]