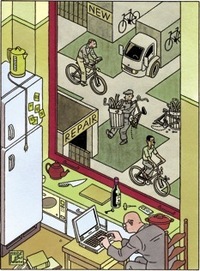 The May 14 issue of The New Yorker is chock-full of innovation goodness, including profiles of innovators like Richard Branson, graffiti artist Banksy, and Wall Street Journal tech guru Walt Mossberg. For design fans, there’s also a fascinating profile of NYC architectural firm Diller Scofidio + Renfro, which is designing a new addition to Lincoln Center. The magazine issue was published in conjunction with the first-ever New Yorker conference on innovation, which took place in New York City on May 6-7.

As much as I enjoy reading about innovation superstars like Richard Branson, one of the real highlights of the issue was a review of a new book (The Shock of the Old) by British historian David Edgerton, who basically argues against an “innovation-centric” view of history. According to Edgerton, most people tend to celebrate new technologies and new innovations as critical next steps in pushing humanity forward to the next glorious age (i.e. the age of the steam engine, the age of the computer). Yet, this may be a radical overstatement about technological change. What is important is not the technology itself, but how people use it. At any given time, it is a messy complex of “old technologies” that really matters. Edgerton bases his thesis on a careful study of military history — he points to the example of WWII, when “horse-powered transport” and U.S. cavalry divisions played a decisive role in the American victory.

Anyway, The New Yorker calls the book “a provocative, concise, and elegant exercise in intellectual Protestanism, enthusiastically nailing its iconoclastic theses on the door of the Church of Technological Hype…” (!)