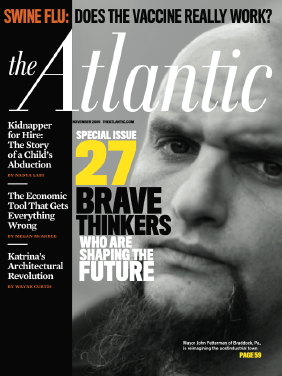 In its first-ever edition of The 27 Brave Thinkers Who are Shaping the Future, The Atlantic magazine takes a closer look at the creative — and often courageous — thinkers who are unafraid to take on the Establishment and challenge the conventional wisdom of how things should be done. In other words, think Profiles in Courage mixed with TIME Magazine’s Person of the Year, and you’ll have a good idea of the type of people that The Atlantic has in mind. There are some obvious picks (is there any feature these days that doesn’t include Barack Obama?), as well as some choices that may not be so obvious (the two co-creators of South Park!).

Within the business & technology space, The Atlantic singled out the following individuals for their unique contributions and innovative insights:

(1) Shai Agassi, for his conceptualization of a national electric car infrastructure

(2) Arthur Sulzberger Jr., for his attempts to bring the New York Times kicking and screaming into the Web 2.0 publishing era

(3) Mark Zuckerberg, for continuing to push Facebook in new directions while risking the displeasure of an engaged user base (i.e. for his attempts to turn Facebook into Twitter)

(4) Jeff Zucker, for challenging the conventional wisdom of prime-time programming at NBC Universal

With the exception of Agassi, the list reads like a who’s-who in the digital media space. Which begs the obvious question: Is it really the case that the only brave thinking is occurring in the world of digital entertainment? Frankly, I was a bit disappointed not to see other corporate thinkers singled out for their unique approaches to problems like healthcare, poverty and global warming.