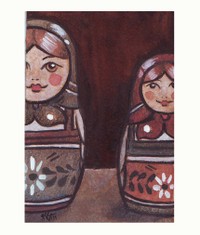 Over the weekend, the Wall Street Journal published a book review of Year Million, a collection of essays by 14 prominent futurists and thinkers who collectively ponder the fate of mankind, one million years hence. Suffice it to say, the thinkers were encouraged to come up with some fairly outlandish predictions – like this one from computer scientist Robert Bradbury, who predicts the creation of the “matryoshka brain”:

“Inevitably, we will leave our bodies entirely behind and evolve into radically different entities. Picture a vast shell-like form surrounding the sun and absorbing all its energy. This is called a Dyson sphere, after Freeman Dyson, the physicist who conceived of it… Now imagine a bunch of nested Dyson spheres that divert all that solar energy into information processing. Borrowing the term for Russian dolls, Mr. Bradbury calls this a ‘matrioshka’ brain.”

Innovation and the Simple Life

As John Maeda points out in his bestselling book The Laws of Simplicity, companies can unlock a tremendous amount of innovation by embracing the principles of simplicity.