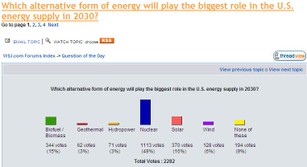 On Monday, the Wall Street Journal ran an online survey of its readers, asking them to predict which form of alternative energy would be most prevalent by the year 2030. Somewhat surprisingly, the top pick was NUCLEAR, with a whopping 49% of the vote. (I’ve been following some uranium companies recently, and it looks like this future expectation is starting to get baked into the stock price of any company dealing with uranium) The next choices were SOLAR (16%), BIOFUEL-BIOMASS (15%), and WIND (6%). Interestingly, a full 9% of respondents said that NONE OF THESE would be the most prevalent form of alternative energy by the year 2030. Do they know something we don’t know, or are they just being cynical?