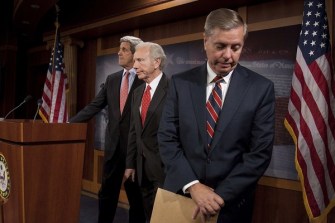 In the wake of last week’s defeat of cap and trade, the predictable narrative offered by bloggers and commentators has been to blame the failure on industry, skeptics, and Republicans. It’s also the explanation likely echoing in the minds of many scientists and environmental advocates.

But it’s important to take a step back from the easy emotional reaction and take a look at the complexity of factors that shape societal gridlock on this issue. As I remarked to Andrew Revkin at Dot Earth earlier this month:

If we were able to statistically model societal inaction on climate change, what proportion of the variance would be accounted for by the disinformation efforts of skeptics and false balance by journalists? Perhaps 10%. Maybe 15%? [Commentators] unfortunately tend to exaggerate the influence of climate skeptics while overlooking the many other factors that contribute to societal gridlock…

At the Breakthrough blog, as Devon Swezey, Yael Borofsky, and Jesse Jenkins detail, Republicans opposed the bill but so did many Democrats giving Harry Reid only 30-40 votes in favor. And while the Chamber of Commerce opposed the bill, major industry members including Shell, BP, and Alcoa helped craft the legislation and actively lobbied for passage.

The public opinion and media environment also contributed to the legislative defeat, but this factor is far more complex than narrowly blaming the work of skeptics, conservative media, or claims about “false balance” in coverage. As I described in a panel presentation earlier this year at Harvard’s Kennedy School of Government, legislation on climate change–which necessitates a non-incremental, systemic change in policy–should be compared to other similar policy debates such as welfare or immigration reform where wider public opinion and the level of news attention has played a decisive role.

As the recent Six Americas of Global Warming report shows, the U.S. public has yet to come to the type of widespread consensus and opinion-intensity on the issue that creates the incentive for the White House, Democratic members of Congress, and moderates among Republicans to take the political risks to pass legislation.

To get to that point, we need to rethink the focus and nature of policy action and how we communicate about the issue. Following Copenhagen and now with the failure of cap and trade, a window has opened for discussion of alternative policy directions. New voices, seats at the table, and fresh ideas are needed on the most effective approaches to curbing greenhouse gas emissions, policy proposals that are also capable of gaining bi-partisan support in Congress.

In an interview with Ezra Klein at the Washington Post, Michael Shellenberger offers this perspective:

I think that some time needs to pass for Democrats and liberals and greens to assess what happened and start coming to terms with the political, economic and technological realities that are the driving force behind the serial political failures of cap-and-trade. Our view is you need a price on carbon, but that it’s going to start very low. No one will impose or sustain a high price on carbon as long as the gap between fossil fuels and clean energy remains so wide. So we need to be moving to a framework where at the center is technological innovation to close the gap between fossil fuels and clean energy. That might need to be funded with a small tax on carbon. But the center is the technological innovation.

In conjunction with our policy approach to the problem, we also need to rethink how we communicate about the relevance of climate change and importantly the benefits that would accrue from proposed action. Environmental groups spent record amounts of resources on advertising and lobbying in support of cap and trade. From this effort, what lessons were learned? What appears to have been successful? What strategies can be ruled out as dead ends?

As the NY Times’ Tom Friedman concluded in his column yesterday:

The Senate’s failure to act is a result of many factors, but one is that the climate-energy policy debate got disconnected from average people. We need less talk about “climate” and more about how conservation saves money, renewable energy creates jobs, restoring the gulf’s marshes sustains fishermen and preserving the rainforest helps poor people. Said Glenn Prickett, vice president at the Nature Conservancy: “We have to take climate change out of the atmosphere, bring it down to earth and show how it matters in people’s everyday lives.”

Audio and Highlights of the Harvard Kennedy School Panel w/ Andrew Revkin on Climate Change, Skeptics, and the Media

At Slate, A Need for Diplomacy in the Climate Wars

Next week the Howard Hughes Medical Institute will be hosting the annual conference of the University Research Magazine Association (URMA). The association is comprised of editors and staffers at magazines […]