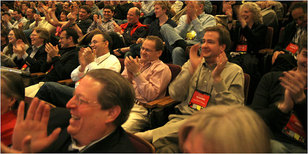 Over the past week, the official TED Blog has provided great coverage of the goings-on at TED 2007 in California, which this year has the tagline of “Icons. Geniuses. Mavericks.” The event has already received a torrent of publicity, from the likes of CBS News, Business Week and the New York Times, which are positioning the event as the U.S. equivalent of Davos. The event is also being covered by a team of about 10-15 bloggers, including Diego Rodriguez of Metacool, giving TED 2007 a distinctive online voice as well. Anyway, be sure to check out the snippets from a great list of more than 50 speakers, including Philippe Starck, physics Nobel prize winner Murray Gell-Mann, venture capitalist John Doerr, entrepreneur Richard Branson, former U.S. President Bill Clinton and former Microsoft CTO Nathan Myhrvold.