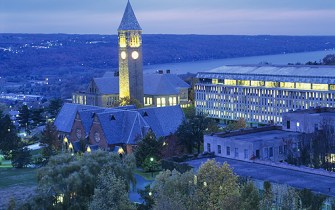 On Friday, May 4, I will be back at my doctoral alma mater to give the following presentation sponsored by the Dept. of Communication. Readers at Cornell or in the area are welcome to turn out. Chris Mooney and I will have an announcement about other forthcoming talks very soon.

Framing Science: The Road to 2008 and Beyond

Over the past several years, in debates over evolution, embryonic stem cell research, and climate change, it has become increasingly apparent that scientific knowledge, alone, does not suffice to win political arguments, change government policies, or influence public opinion. Put simply, the media, policymakers, and the public consume scientific information in a vastly different way than do the scientists who generate it. As a result, when science becomes the subject of attention across political contexts, scientists and their representatives too often find themselves at a loss over how to effectively engage a diverse American citizenry.

In this presentation, American University professor Matthew Nisbet presents research and recommendations on how the scientific community can “reframe” old debates in new ways, taking advantage of a fragmented media environment to connect with non-traditional audiences. A key point of emphasis will be that scientists must adopt a language that emphasizes shared values and has broad appeal, and that avoids the pitfall of seeming to belittle fellow citizens or attacking their religious beliefs.

Nisbet recently published these suggestions in articles at Science and the Sunday Outlook section of the Washington Post, sparking a major blog debate among scientists, journalists, social scientists, and others. He will discuss how these reactions offer insight into how science communication is perceived by various groups and stakeholders.

This spring in the sophomore-level course I teach on “Communication and Society,” we spent several weeks examining the many ways that individuals and groups are using the internet to alter […]