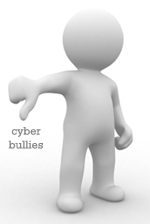 Andy Carvin at Learning Now has declared this Friday, March 30, to be Stop Cyberbullying Day. I encourage everyone to read Andy’s post and join in. Share a story, take a stand, but don’t be silent. You’ll see a post from me on this topic on Friday for sure.

Also, I made a few images for people’s web sites or blogs. They’re not the best but feel free to use them as desired.

Women of the Web Administrator Supershow