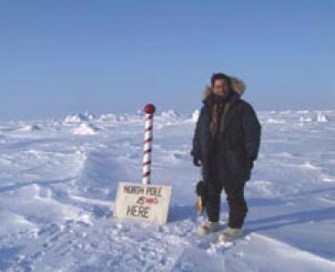 Just to show you how out of touch Inhofe and his staff are in their attack on the media, they even label as alarmist Andrew Revkin of the NY Times. I’ve read through literally dozens of Revkin’s articles, I have seen him speak on several occasions, and interviewed him for this article on hurricane coverage. Of all the journalists out there, he is probably the most sophisticated and nuanced when it comes to understanding and accurately communicating scientific uncertainty. (And don’t take my word for it, ask climate scientists what they think.) In fact, Revkin himself has been critical of some of the coverage out there, such as this year’s Time magazine cover story (“Be Worried, Be Very Worried.”)

Yet, Inhofe and staff attack Revkin’s new kids book, The North Pole Was Here, saying that because he writes that it might be possible later this century to sail a boat to the North Pole, that Revkin is scaring children. Revkin defends his work by way of his blog and Amazon book site.

It’s a leading example of how journalists can use blogs to engage with critics and readers on coverage perceived as controversial. In fact, I’m going to use it as an example in this SOLD OUT talk I am giving tomorrow night on science blogging to the DC Science Writers Association.