Squeezing a quick update on Sinabung between classes … here goes!

With the ongoing volcanic crisis at Sinabung in Indonesia, the United States has pledged funds to help those who have been displaced by the eruptions. This assistance includes help from VDAP – the Volcanic Disaster Assistance Program – and includes seismic equipment to help monitor the activity at the volcano. For those of you unfamiliar with VDAP, think of it as a crack team of USGS volcanologists who go out and help countries that request assistance in a volcanic crisis – check out the NOVA “In the Path of a Killer Volcano” have came out after the 1991 eruption of Pinatubo to get an idea of what VDAP does. 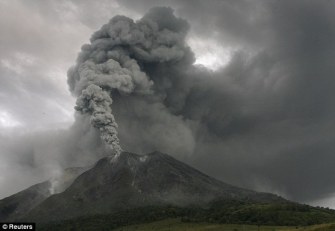 Eruptions readers have been watching the Sinabung webcam carefully for changes at the Indonesian volcano – including a great time lapse of activity (video) from September 11 showing the billowing plumes coming from the active crater. There is also some realtime data from Sinabung provided by the PVMBG, some of which is in English.

Top left: An image of lightning over Sinabung, taken on September 11, 2010.

{Thanks to all the Eruptions readers who provided links for this post.}

The White House message machine went into over drive this weekend as President Obama in public remarks emphasized the need for national unity and tolerance of others, especially for Americans […]