In September 2007 I profiled a book that I had purchased called The 21st Century Principal. In that post, I noted the extreme paucity of content related to digital technologies, particularly given its purpose of examining

the future of public schooling in the United States – and what it will mean to be a leader in public schools – by focusing on the issues that are most likely to have an impact on American society within the next 20 years. 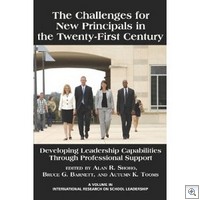 Today I received notice of a new book, The Challenges for New Principals in the 21st Century. Here are the chapter titles:

I know many of the editors and authors for this book, and I’m sure it’s going to have some good, research-based information for new principals. But I confess I’m highly skeptical of the book title…

I understand that the role of school principals encompasses many things besides digital technologies. That said, should school leadership books be allowed to include phrases like ‘challenges’ and ‘21st century’ in their titles if they substantially ignore the leadership and learning issues related to digital technologies? I’m not sure they should…

Be a courageous edublogger

Miguel Guhlin had an awesome post yesterday about being a courageous edublogger. Here are a couple of quotes:I have found that discussing some topics usually ruffle feathers of those who […]