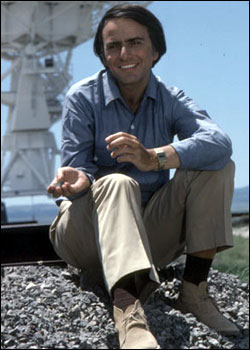 Before there was EO Wilson’s breakthrough success with The Creation, there was Carl Sagan, who was a master at emphasizing the shared values between science and religion.

Consider this example: According to both Sagan biographies, during the late 1980s, in advocating his “nuclear winter” hypothesis, the Cornell astronomer led a delegation of scientists to the Vatican to give a research briefing for Pope John Paul, who subsequently issued a statement against nuclear build-up. Based on the meeting’s success, Sagan came away convinced of the need to emphasize the common goals between scientists and religious publics in solving world problems.

Consider this second example: Today, during a meeting with my graduate students working with me on the upcoming AAAS presentation, one particular NY Times article caught my eye as relevant to recent blog discussion.

As we argued in our reply to letters at Science, what Sagan and EO Wilson do so well intuitively, we need to figure out, test, and do systematically as a global community of scientists and secularists.

CARL SAGAN, a professor of astronomy and director of the Laboratory for Planetary Studies at Cornell University, appealed yesterday for religion and science to join hands in preserving the global environment. He was joined in his appeal by 22 well-known scientists.

”Efforts to safeguard and cherish the environment need to be infused with a vision of the sacred,” the scientists said. Dr. Sagan made the appeal public in Moscow on the first day of a conference on the environment and economic development sponsored by the Global Forum of Spiritual and Parliamentary Leaders on Human Survival. The forum is a private organization trying to focus attention on environmental problems. More than a thousand religious, political and scientific leaders from 83 nations are attending the conference.

Last week, before leaving for Moscow, Dr. Sagan said the appeal was significant because of the historic antagonisms between science and religion.

”I am personally skeptical about many aspects of revealed religion,” Dr. Sagan said. ”But I am sure of the awe and reverence that the meticulously balanced nature of the global environment elicits in me.”

About 100 religious leaders have signed a statement welcoming the appeal as ”a unique moment and opportunity in the relationship of science and religion.” The Rev. James Parks Morton, Dean of the Episcopal Cathedral of St. John the Divine in New York and an organizer of the Moscow conference, said in Moscow that scientists and religious leaders would meet immediately to discuss ”practical next steps.”

Those signing the appeal included Hans A. Bethe, the physicist; Stephen Jay Gould, the evolutionary theorist, and Jerome B. Wiesner, former president of the Massachusetts Institute of Technology.

The statement listed the dangers of global warming, the depletion of the ozone layer, the extinction of plant and animal species, the destruction of rain forests and the threat of nuclear war.

”Problems of such magnitude,” the scientists said, ”and solutions demanding so broad a perspective, must be recognized from the outset as having a religious as well as a scientific dimension.”