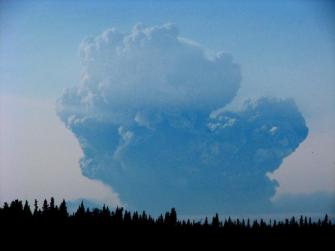 Redoubt did not stray from its pattern of explosive eruptions producing >20,000 foot / 10,000 meter ash columns over the weekend. However, what did change was the wind, and because of that, Anchorage began to feel the effects of the volcano. Ash prompted the closure of Ted Stevens International Airport in Anchorage for 22 hours on Saturday and Sunday. The airports near Redoubt are still experiencing delays and closure due to ash – remember, remobilized ash can be a problem as well, but many have reopened after ash was cleaned from the runways and aircraft.

Meanwhile, Eruptions readers near the city reported a light dusting of ash and the smell of sulfur (thanks to Randy for the report). These conditions may return if the wind blows ash towards the city during eruptions in the coming weeks. Remember, ash is nothing to take lightly, so take precautions if ash does begin to fall.

As for the current activity at Redoubt, weather conditions have really permitted a good look at the volcano since Saturday. Pilots have reported a 15,000 foot / 5,000 meter steam plume, while AVO reports smaller explosions have occurred since 40,000 foot / 12,000 meter ash column eruption on Saturday evening. Most of these smaller events have produced ash columns less than 25,000 feet / 7,500 meters. The weather looks to be clearing up today, so AVO hopes to do an overflight of the volcano and area. The seismicity remains elevated, so expect more explosions of varying strengths over the next few weeks.

A special thanks to all the readers who kept everyone up to date with the goings-on at Redoubt over the weekend while I was away.