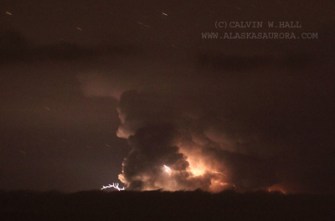 Redoubt continues to huff and puff, with an almost constant ash plume of ~15,000 feet / 5,000 meters. This after ~4 PM (Alaska Time), an explosion produced a 25,000 foot / 8,000 meter ash column that disrupted flights in and out of Anchorage again. Also, the air in the Kenai Peninsula area is beginning to feel the effects of the eruption, as AVO notes:

Satellite images from this morning show a broad layer of volcanic haze extending east of the volcano over the Kenai Peninsula, the Anchorage Bowl, and the Matanuska-Susitna Valley.

You can see what ash does to the air in some of the images posted on the Redoubt AVO page, along with some pictures from the overflight of the volcano. Calvin Hall has provided me with some of his own pictures, including a spectacular shot of lightning being generated in the clouds of the Redoubt ash column (above). Calvin also reports “The vog today was miserable. Finally had clear weather, then could not see thru the vog.”

Other great tease from the AVO update this afternoon is this gem:

Satellite images from last night show a thermal anomaly at the vent and are possibly due to the extrusion of a lava dome in the summit crater.

Yup, we might be starting to see new magma at the surface, in other words, the new dome. I’m sure if conditions permit, the AVO field crew will try to get a glimpse of this in their observation flights.

And for those of you, like me, who love the crystals in magma, AVO has posted some backscatter electron microprobe images of minerals from the currently eruption, including a pretty knackered amphibole showing reaction rims (disequilibrium), some nicer looking calcic pyroxene, orthopyroxene rimmed with plagioclase and a gorgeous, zoned plagioclase. All of this, to me, suggests a complex history to the magma being erupted right now – mixing, storage, rejuvenation – the whole nine yards.

With Redoubt and Tongan eruptions in full swing, Yellowstone has decided to join the eruptive fun.