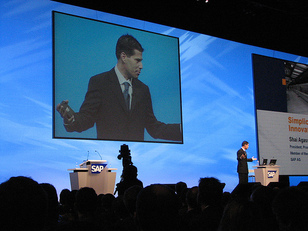 nThe other day, the Wall Street Journal featured one of the most inspiring stories about innovation that I’ve read in quite some time. Shai Agassi, once a fast-rising senior executive at software giant SAP, left the company in March under mysterious circumstances and dropped off the grid, only to re-surface this week, flush with $200 million in VC funding and a radical idea for disrupting the automotive industry. This, despite the fact that until 2005, he knew little to nothing about automobiles and even less about alternative energy. (At one point, investors were throwing money at Agassi, even though he didn’t even have a name for his company). As Jason Hiner of Tech Republic points out, Shai Agassi is now the man of the hour when it comes to thinking about innovation within the automotive industry:

“On Monday when I flew to New York I couldn’t get away from ShainAgassi (right), the former president of enterprise software maker SAP.nI first spotted him on an airport TV being interviewed on CNN. Then Inread a feature story about him in The Wall Street Journal, which I picked up to read on the plane. Then, when I arrived at my hotel I went online and discovered a blog post about Agassi written by my colleague Dan Farber over on ZDNet.

Agassi was everywhere because he publicly re-emerged from obscurity after resigning from SAP in March. Agassi’s new gig is called Project Better Placenand its mission is to create a new platform and ecosystem for electricncars, and Agassi has raised $200 million to get it off the ground.

What Agassi’s Better Place wants to do is to separate the batterynfrom the car, get automakers to standardize on a single battery type,nand then set up a network of charging sites (run by Better Place) wherencars can drive through and have their batteries changed. Agassi saysnthat current technology allows for batteries that can power cars forn100 miles.

Under the model that Agassi is proposing, cars would be sold withoutnbatteries by the car makers (potentially bundled with batteries by thencar dealers) and Agassi’s company would sell monthly subscriptions tonconsumers for swapping out their batteries at charging sites.”

This is a radical idea. According to the Wall Street Journal, Shai Agassi basically woke up one day and asked, “Why can’t the automotive industry look a lot more like the mobile phone industry?” In other words, Agassi began thinking of auto “re-charging stations” as being part of a large national network, with people owning electric cars having access to this network. Instead of paying cash for gas at gas stations, consumers would now pay a monthly subscription fee to “re-up” their electric batteries:

“In the early years of his company, he expects to distribute carsndirectly to companies or other large buyers. But he eventually expectsnconsumers to get their cars from conventional dealers, while henoperates an infrastructure that includes the batteries and the chargingnnetwork. He likens his company to a wireless provider, such asnAT&T, that provides a subscription service that makes phone callsnpossible, while auto makers would be like handset makers such as Nokia.”

Mad props to Agassi for having the conviction to follow his dreams. Be sure to check out his blog: The Long Tailpipe.

The Wall Street Journal referred to it as “Target’s never-ending quest to be hipper than the competition” — an upcoming fashion show that will feature holograms instead of models. The […]